Rodeo FX was asked to develop the look for the environments of Mirror Mirror under the guidance of  the VFX supervisor Tom Wood, the production designer Tom Foden and the director Tarsem Singh and was brought in as part of the VFX production team to create 160+ VFX shots. 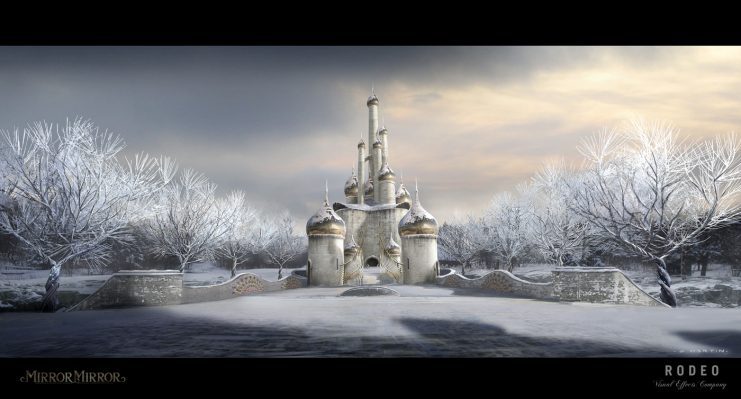 Rodeo FX concept artist, Olivier Martin, adds a few comments about the concept art. “The castle was inspired by Russian castles and from Gaudi’s Gardens shapes. The trees were meant to be frozen fantastical trees … we had to give a  fairy like ,fantastical and eccentric look for this magical kingdom. We had to define the look of the village, especially the roofs since only a small portion of the village was built on-set. In fact, only the lower section of the four houses in the middle had been built, the roofs and the rest of the village was always meant to be created in computer graphics.   That is the reason we had to establish the look, feel and shape of this village before building it in computer graphics. The houses were inspired by old French houses from the east and the village had to form like a pyramid with sharp roofs”

VFX shots includes: the film’s opening shot transitioning the seasons from summer to winter, the long shot of the Castle and the cliff on which it stood, the long distance shot with the approach leading to Snow White opening her bedroom doors, the interior of her bedroom, day and night sequences of the castle’s exterior, stormy skies, snow falling, computer generated (CG) crowds, Snow White’s courtyard and the interior and background of the evil Queen’s Chamber. Rodeo FX created all of the Snow White castle establishing shots. Rodeo FX’s collaboration on Mirror Mirror marked the second time working with Tarsem Singh as the company also created visual effects on Relativity’s epic adventure IMMORTALS.

Making of The immortals

Making of Resident Evil After Life