Check out the other Lessons on IAMAG here.

When you meet a friend the first thing you look at is his face. You say, “You look fine” or “You look sick” or “You look sad” or “You look happy.” You recognize Joe or Bill or Mary by the eyes or nose or ears or hair. The good Lord is an expert at put­ting people together so you can identify them easily. Each of us has different features – even twins are not really identical – and, in addition, each of us has a definite and individual personality. As an observer and recorder of the human race, you must have an awareness not only of the surface differences between people but also of what makes them tick. Jn general, you must become a psychologist. A good understanding of the emotional differ­ences between people will help you to create cartoon characters that will react properly to any set of circumstances and leave no doubt in the reader’s mind as to the type of people they are.

Before beginning to draw cartoon heads, you must learn to draw the balloon shape freely and quickly. Never use a compass. To form your balloon, swing the pencil around several times on the paper. The freely drawn balloon will be only a guide for the general shape of the head, so make it light – you can strengthen the outline later. Practice drawing balloons about the size shown here, because most of your work as a cartoonist will call for heads this size or smaller. After you have gotten the hang of drawing the balloons and can dash them off easily, you are ready to swing the two guide lines in. Sketch these lines as though they go completely around the balloon. This will give the head a solid, three-dimensional quality and keep you from drawing flat, pancake-type faces. Then start drawing in the eyes, nose, mouth and ears, following the principles demonstrated here.

By combining the curved eye line with a curved center line, the head can be drawn to face in any direction and at whatever angle you wish. Establish these guide lines first and you should have little trouble lo­cating the features properly no matter at which angle the head is tilted or turned. 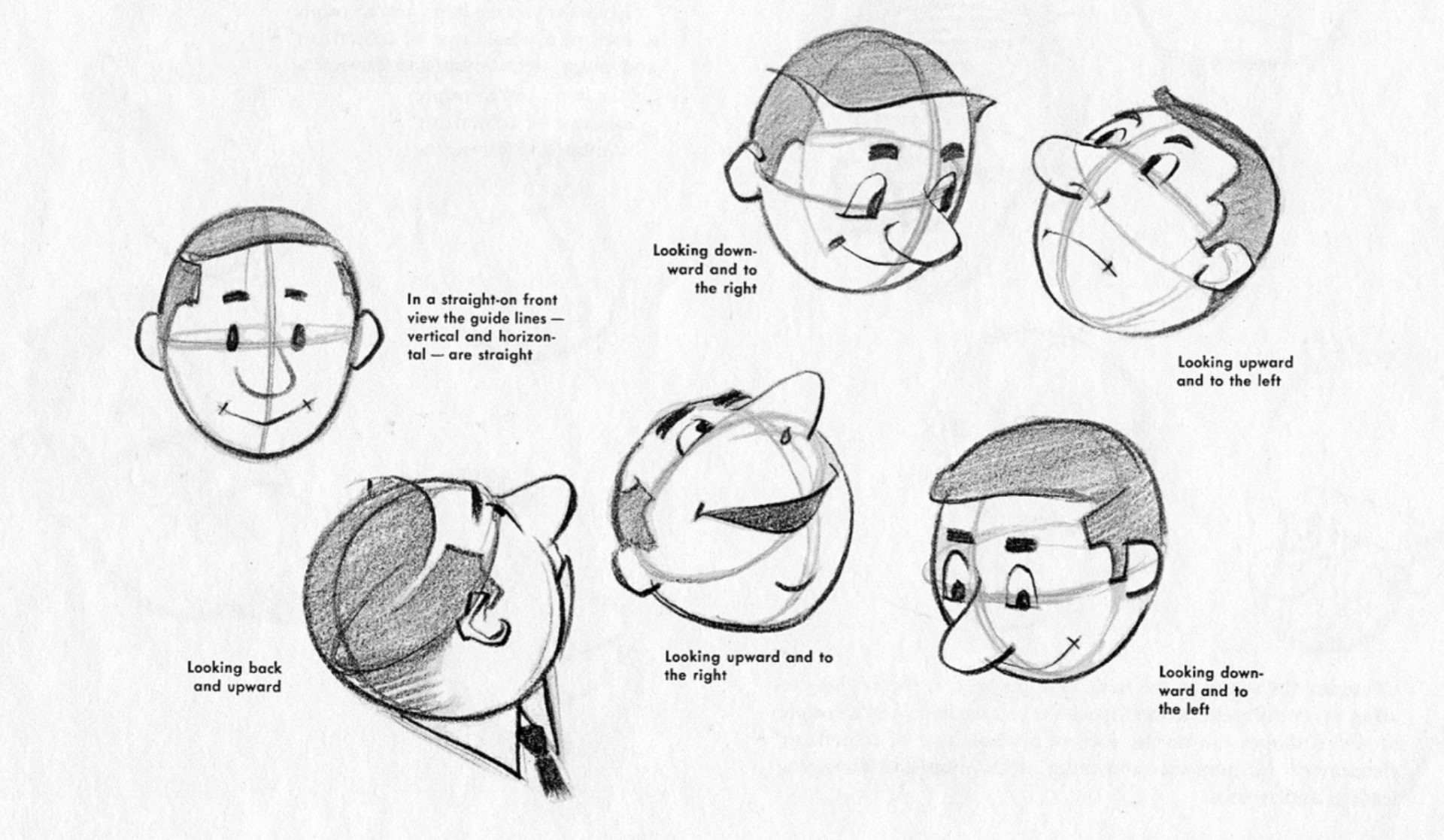 Changing the shape of the balloon

If everyone had his or her hair shaved off, you would see that there is as much variety in the human head as there is in the top of a range of mountains. Human heads come in almost every shape, from a lima bean to a toy top – and so do cartoon heads. The round balloon head is only the beginning.
Imagine that you are grasping a toy balloon in your hands. Now squeeze it hard. The balloon changes its shape but it still keeps its three dimensions. The same thing must be true of the different-shaped cartoon heads you draw. Regardless of the form, your center line must follow the curve of that form. If it does, you can place the features correctly in relation to the center line and maintain the three-dimensional effect. Changing the shape of the basic balloon head is the key to cre­ating many different cartoon types. As you see here, just a couple of varied shapes can be the start of a whole cast of interesting characters – Milquetoasts and mugs, debutantes and dowagers, seadogs and swamis. 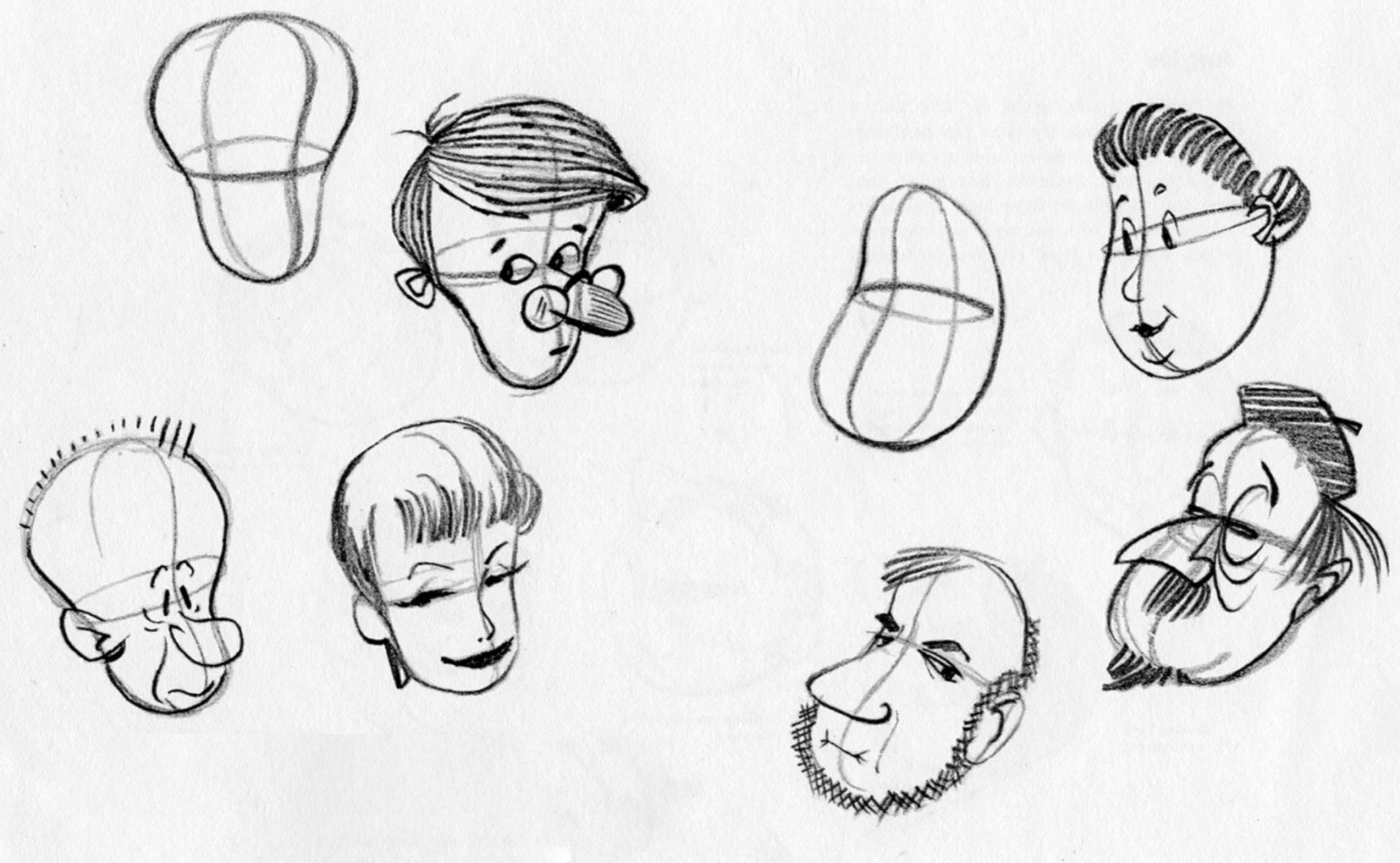 Varying the location of the features

While the eye line is usually halfway between the top of the head and the chin, interesting cartoon characters of many differ­ent types can be created by raising or lowering this line. Even with balloons of the same shape a shift in the eye line can be the start of a new character. Keep in mind, however, that since the features are evenly balanced on each side of the center line, this line serves as a fixed guide for locating them.

Hair on the head and face

In the simple cartoon head, hair makes the head male or female. When it comes to hair, anything goes – from the last precious few of the almost bald gent to the weird result of milady’s latest visit to the beauty parlor. Every successful cartoon character has its own distinctive hairdo. Hair is important stuff. 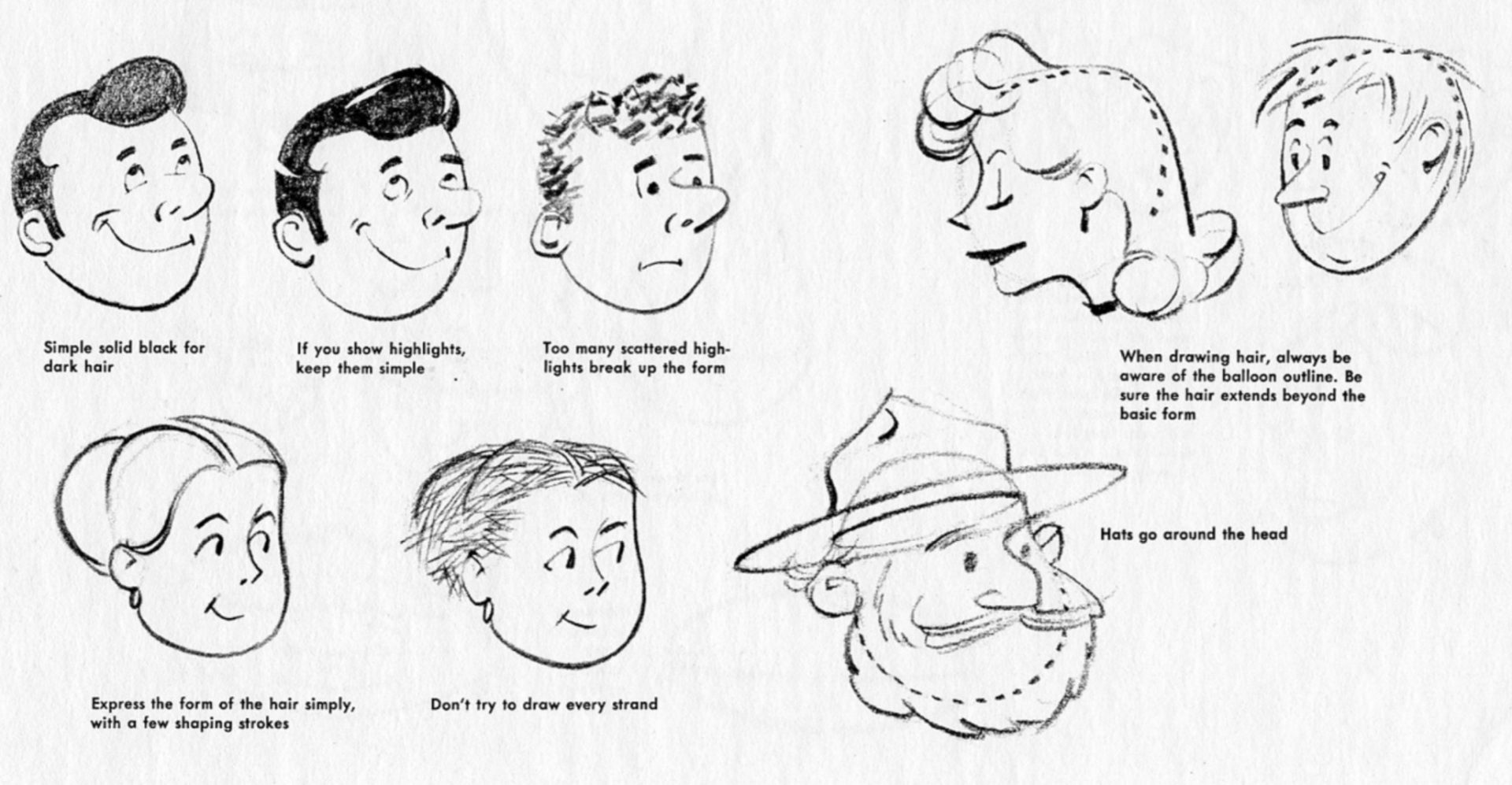 Girls’ heads are constructed the same way as any others, but they will appear cuter and more glamorous if the eye line is drawn lower than halfway. Remember to keep the outlines of the face smooth and simple and give emphasis to hair, eyes, and lips. Later in the Course, girls will be treated in greater detail. For now, this page will give you a good basic start. Girls add up to more than half of the human race. Learn to draw them well! 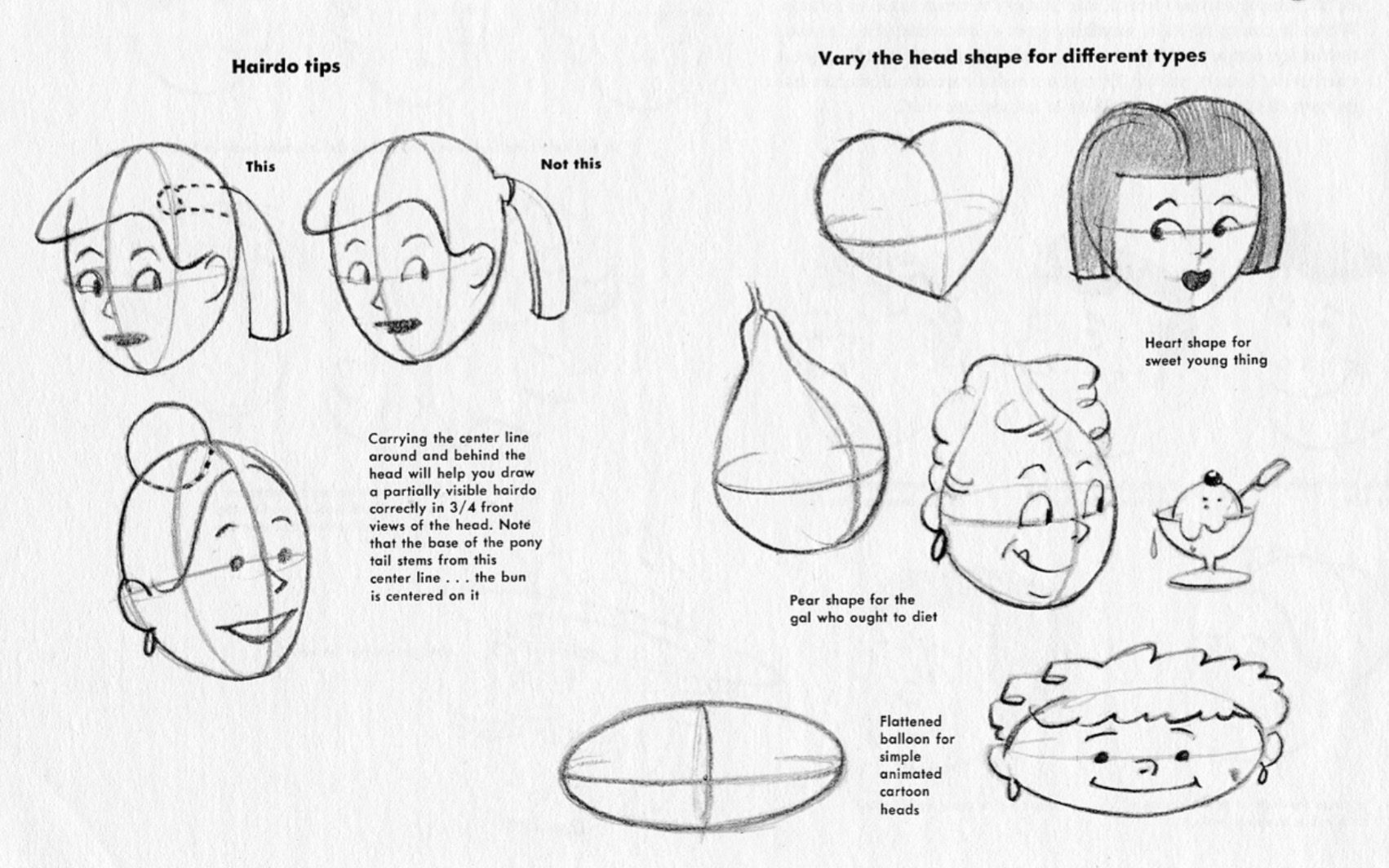 If a cartoon character is to be animated and interesting to the reader, it must express exactly the right emotion. Later in the Course we will show you how the whole fig­ure can be used to express emotions, but, for now, we are concerned with the head and face. Joy, sorrow, anger, and other moods are shown chiefiy in the face and you should learn all you can about how to draw them.
A good way to begin is to study the faces of the people around you, and the different moods they express. Also, set up a mirror and study -your own features as you regis­ter various emotions. See what happens to eyes, eyebrows, mouth corners, etc., and practice drawing what you see.
A good cartoonist doesn’t just think of his character’s expressions and emotions -he feels them. This is what gives his characters conviction. Watch even the most ex­perienced cartoonist at work and you will note that when he draws an unusual expression on the face of a char­acter, his own face unconsciously assumes that expression. 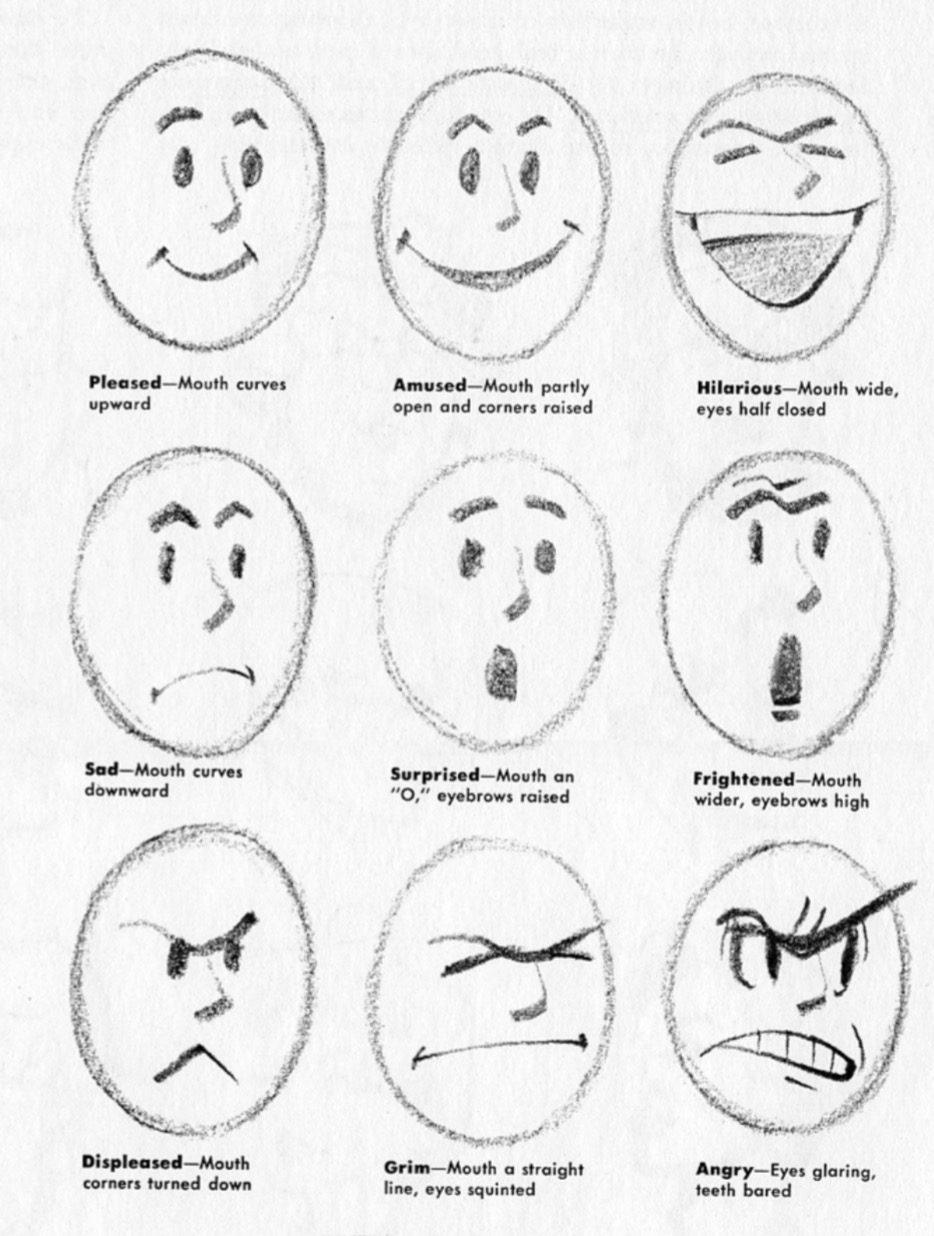 Give the facial expression more punch and drama by drawing the head in an attitude or gesture that matches the emotion expressed by the features. Again, stand in front of a mirror and try out some of the basic expres­sions. Note how naturally the head takes a position that corresponds to the expression. When you laugh, the head goes back. When you look dejected, it goes down. For nearly every facial expression there is a head gesture. Practice these gestures and apply them in your work. 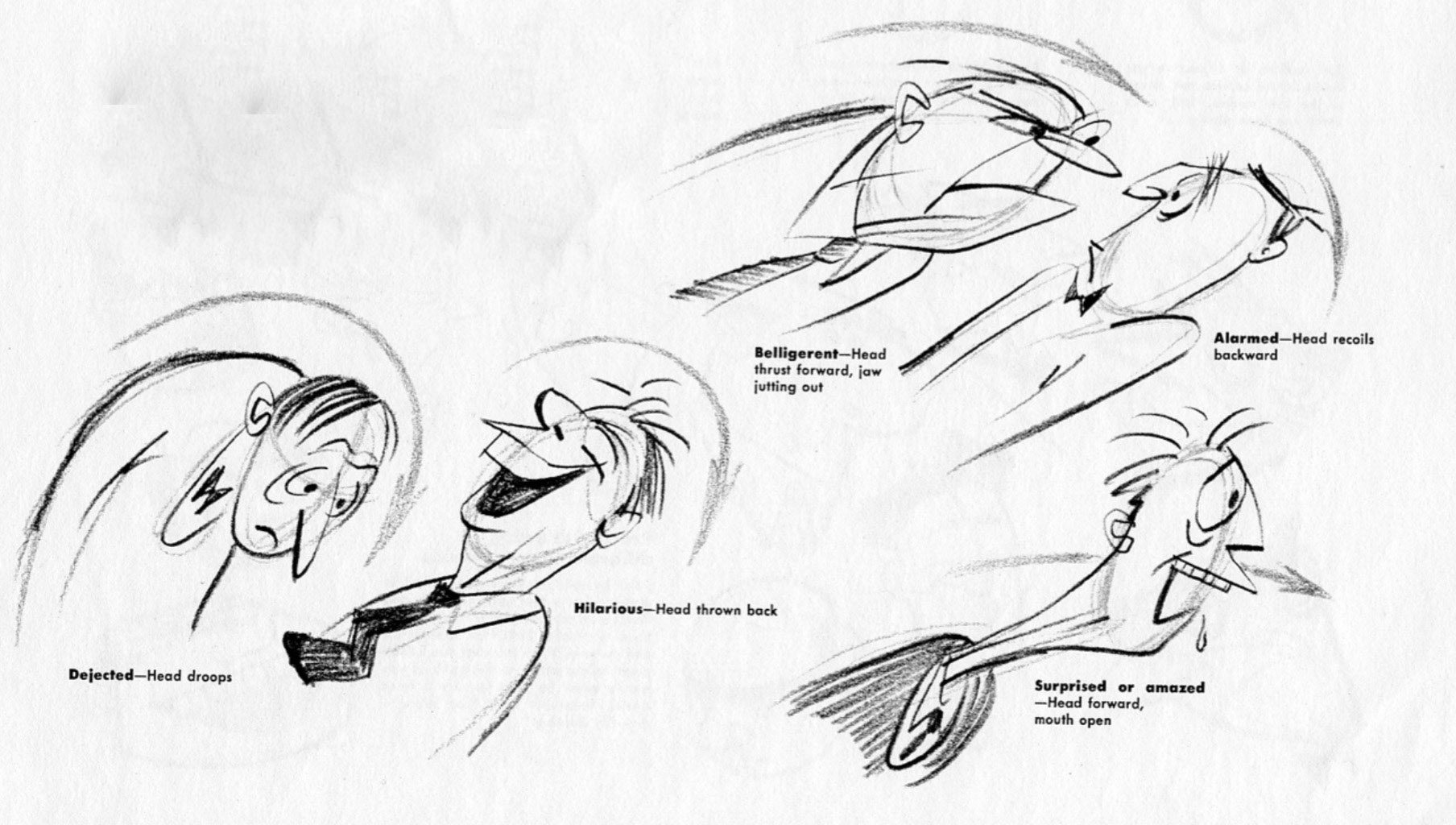 All cartoon characters are based on real people

All cartoon heads, regardless of the style of drawing, are based on real people. To turn a real head into a cartoon head you must do two things: (1) Eliminate detail and (2) exaggerate outstanding characteristics. This enables you to express the feel­ings and personality of the character clearly and sharply. To show you what we mean, we had four cartoonists draw their interpretations of three models. Their drawings, ranging from the realistic to the highly stylized, appear below. Note that each man has created a unique and individual cartoon while expressing the type and personality of the model. 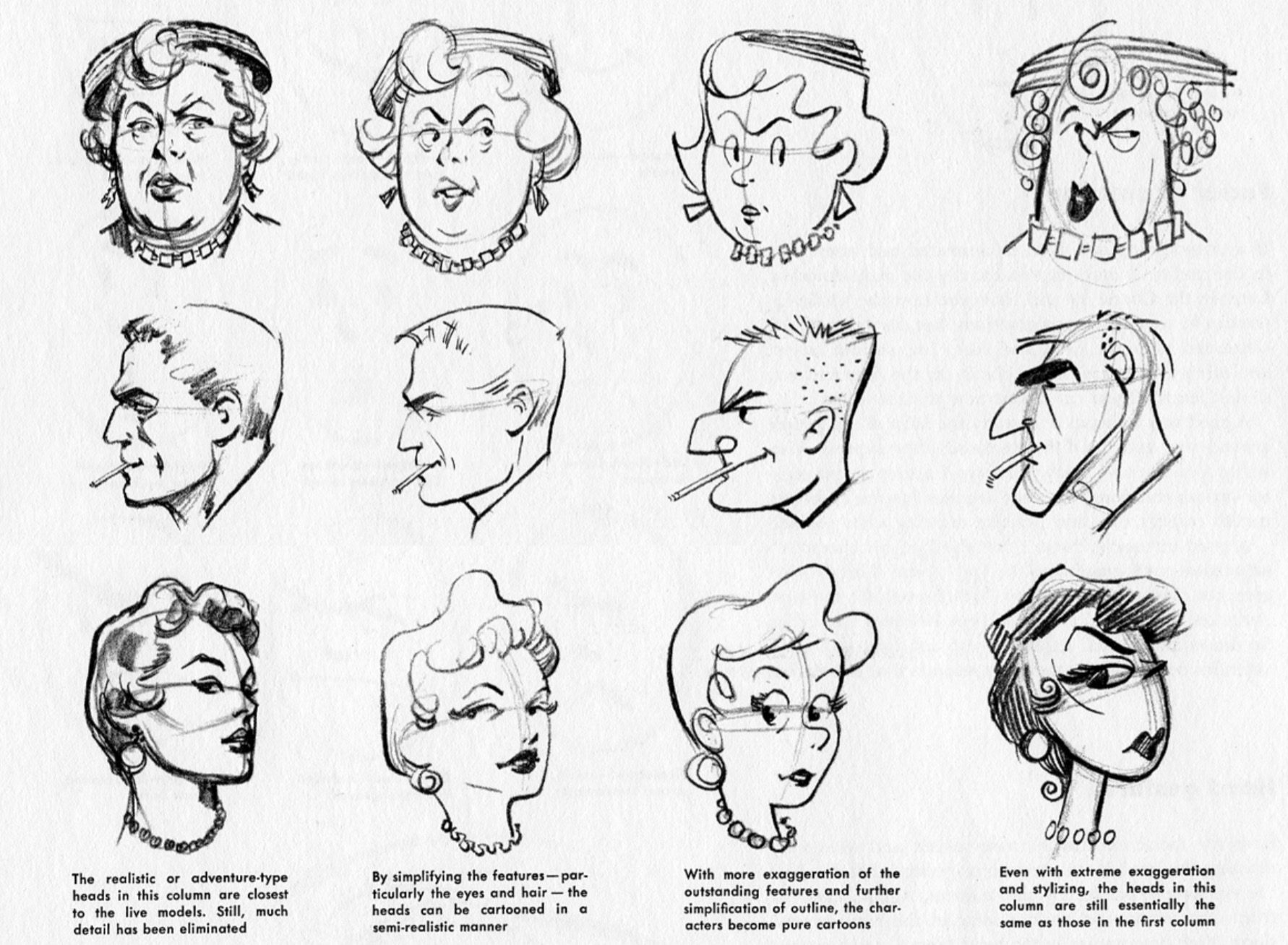