Check out the other Lessons on IAMAG here.

The human figure is a wonderful structure, made to order for cartoonists. It consists of six basic parts -the head, the torso·, two arms and two legs. As a cartoonist, you will not be held to the strict rules of anatomy. You may lengthen, shorten or other wise distort any part of the figure you please -if i’t will help you portray the character you are trying to create. Very few people have perfect figures, and it is by exaggerating the imperfections of the average figure that the cartoonist makes his figures funny. The man who lives next door to you probably gets up every morning and looks with pride at himself in the mirror. In his own eyes he is quite a hunk of man, but you see him as he really is, and would draw him in such a way that -if he saw the drawing -you would have to move out of the neigh­borhood or meet him out behind the garage. If he has a small potbelly and short arms, you would exaggerate these parts. He wouldn’t like it, but the odds are that the rest of the neighbor­hood would recognize him in the drawing. So going behind the physical appearance, you should cap­ture the subject’s personality in your drawing. A lazy person, for example, would not be shown standing erect with bulging muscles -he would be drawn stooped over in a wilted position. Nor would a sloppy woman sit on a stool in the same manner as a prim school teacher. This capturing of personality in your characters is very important -just how important you can prove to yourself by studying the work of successful cartoonists.

The basic form figure at the right demonstrates the all-important principle emphasized throughout this lesson – that the human body is made up of simple, solid forms. The basic form figure reduces the body to its essential masses. Every distracting ele­ment has been eliminated. Think of the form figure as if it were carved out of heavy wood – it is solid, three-dimensional. Now compare the form figure with the photograph of the liv­ing model to the left. Both are similar in basic construction. In both model and form figure, the neck, the arms and legs, and the rib cage are essentially modified cylinders, while the head is basically a sphere or egg shape and the pelvis is spherical. It is extremely important in the beginning to view the body in terms of these simple, basic forms – to understand the essen­tial masses of the separate parts and place these in their proper relationship. In cartooning, you can exaggerate individual parts of the basic form figure to create humorous characters and to give action to the drawing. But regardless of your style ot draw­ing or the exaggeration, you should adhere to the principles of three-dimensional form. ·with a solid form to build on, the adding of figure details and clothing is greatly simplified. 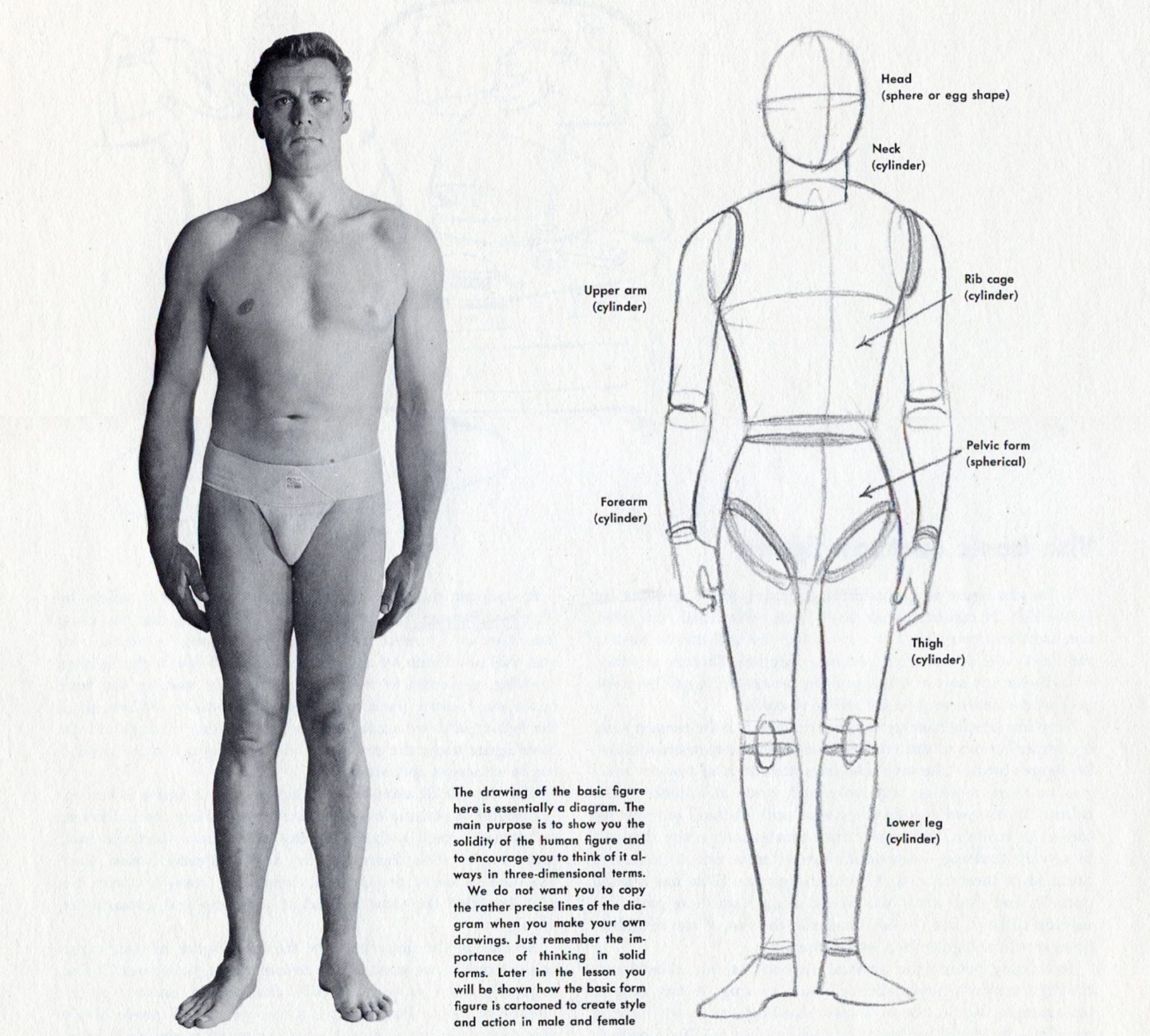 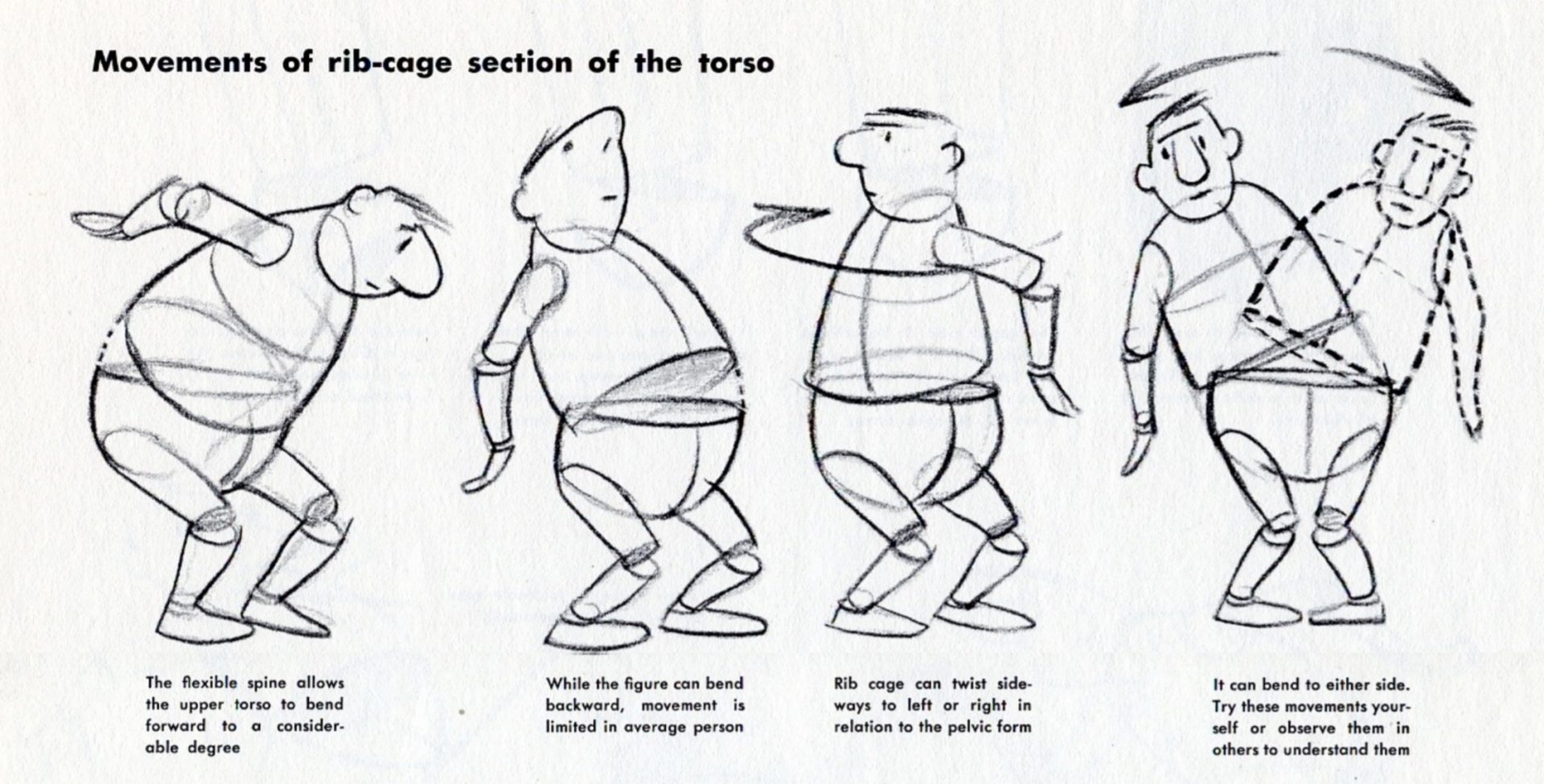 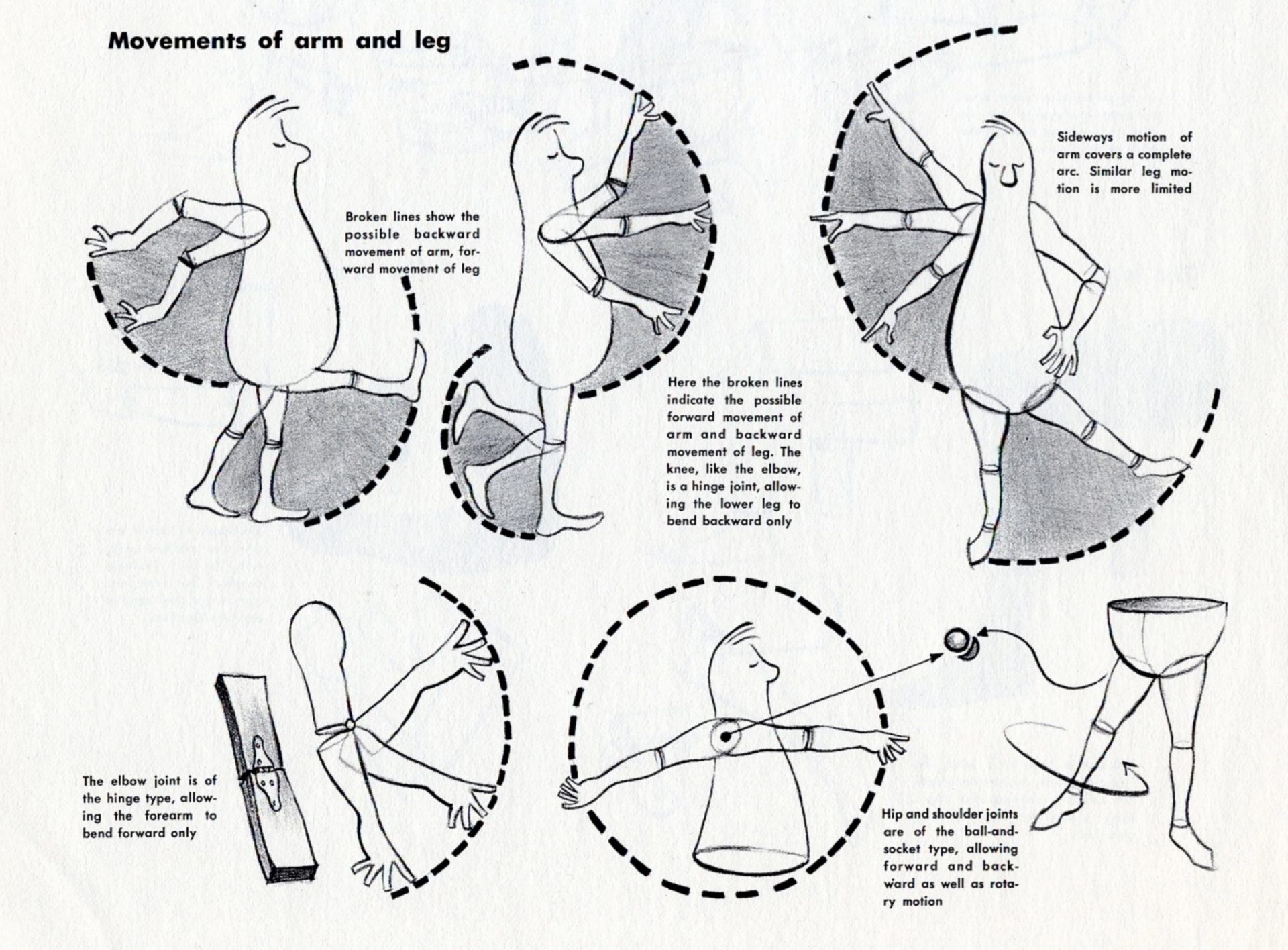 When you view an object from one angle, you may see it at its full length. View it from a different angle, however, and it appears to become much shorter than it actually is. For instance, a cylinder held crosswise in front of you might have an actual length of twelve inches, but turn that same cylinder so that it points toward you and its over-all length appears greatly reduced. This is known as foreshortening. The careful use of foreshortening will help you give your figures a con­vincing feeling of three-dimensional form. Whether your figures are merely sitting or are engaged in some violent action, foreshortening will really make them seem to exist in depth. 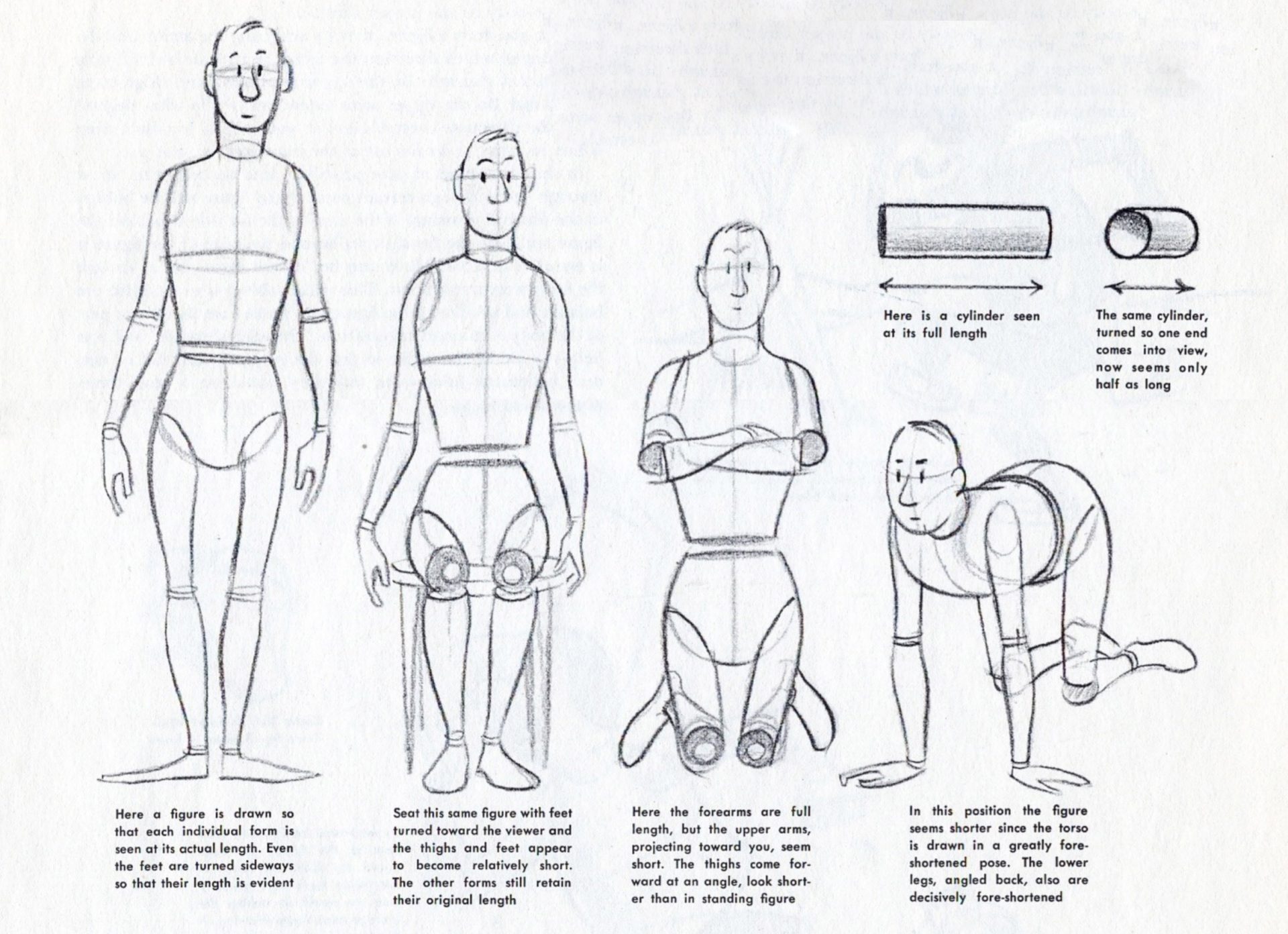 The basic forms in action

Because the cylinder and sphere are three-dimensional forms, they work perfectly in helping you establish the action and di­rection of the individual parts of the figure and of the figure as a whole. Just as we used the center line in Lesson 1 to “turn” the comic head, we can use a center line on the torso to help u.s turn the body in the proper direction. When you draw a figure, start by analyzing the action and de­termining in which direction the figure and its individual parts must go. Ask yourse1£: Do the upper arm, torso, and thigh come toward me? Do the upper arms extend away? To what degree? Once the direction is established in your mind, foreshortening is easy to arrive at by the use of the basic form of that part. In the early stages of your penciling, it is important to “draw through” even though certain parts of the figure will be hidden in the finished drawing. If the arm on the far side is behind the figure and only the hand shows beyond the edge of the figure it is essential that the whole arm be “drawn through,” as though the body were transparent. This will enable you to establish the balance and solidity of the figure and make sure that every part of the body is in a natural position. “Drawing through” will also help you clothe the figure so that the garments will fall in nor­mal, believable folds -the way they would on a real, three­dimensional figure. 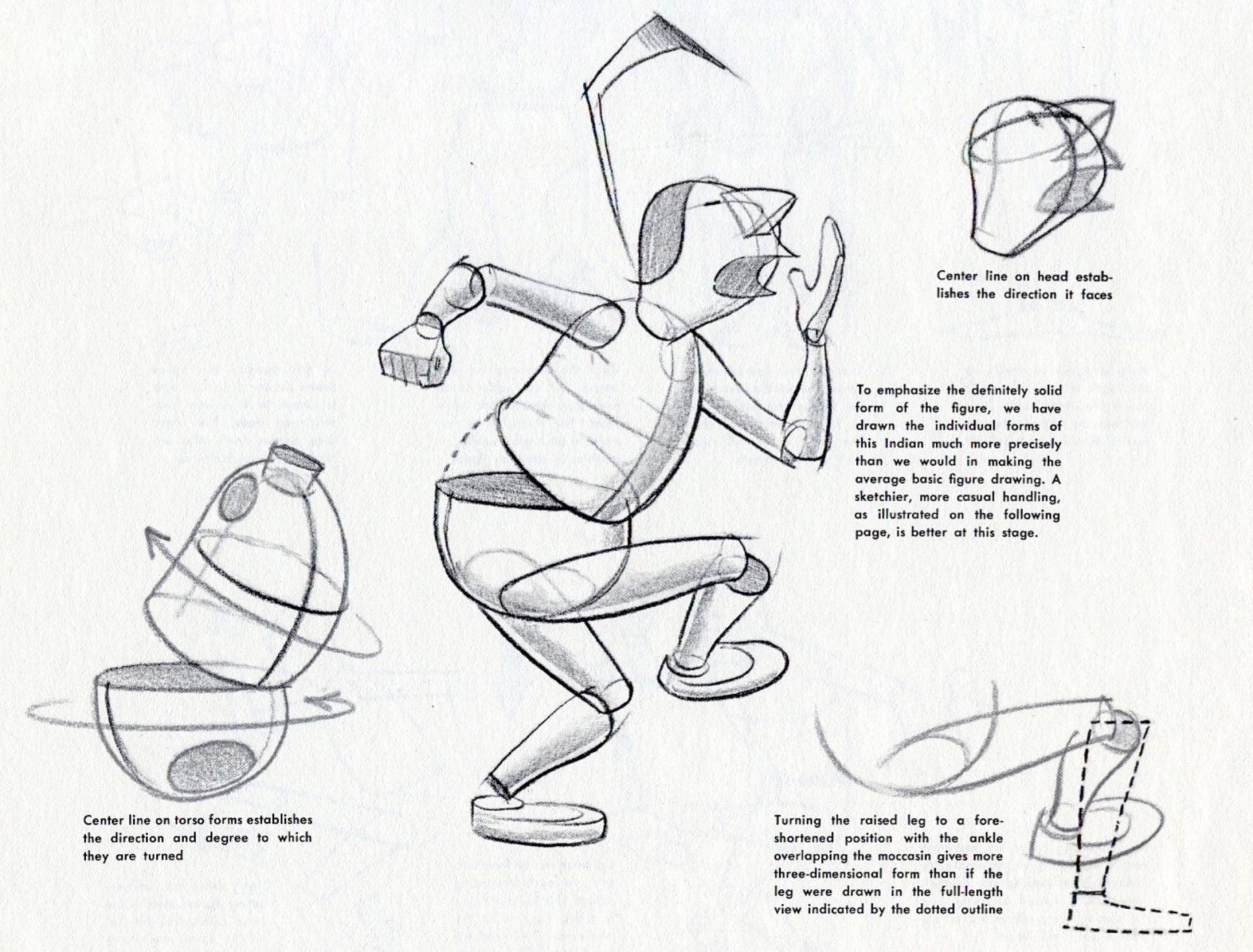 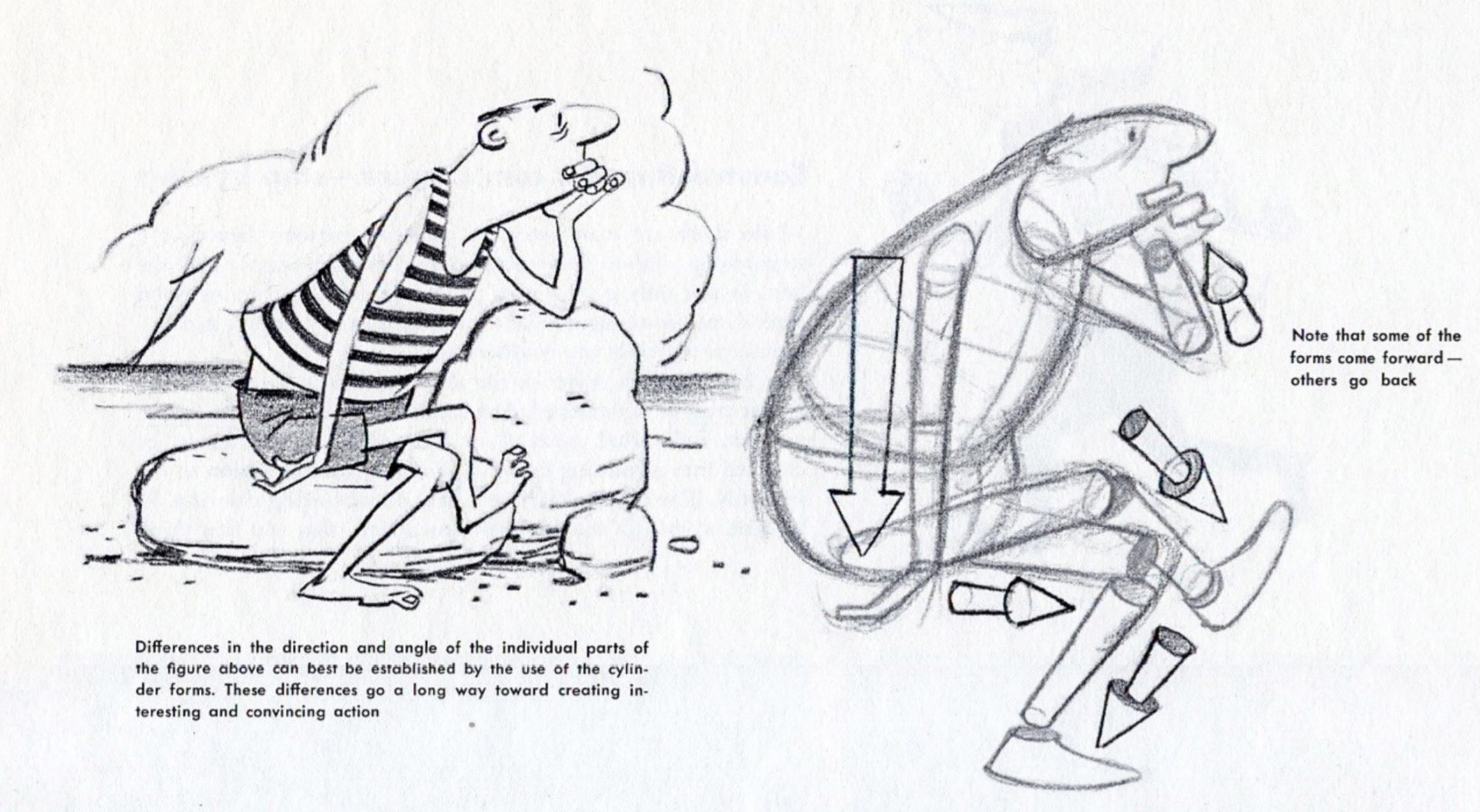 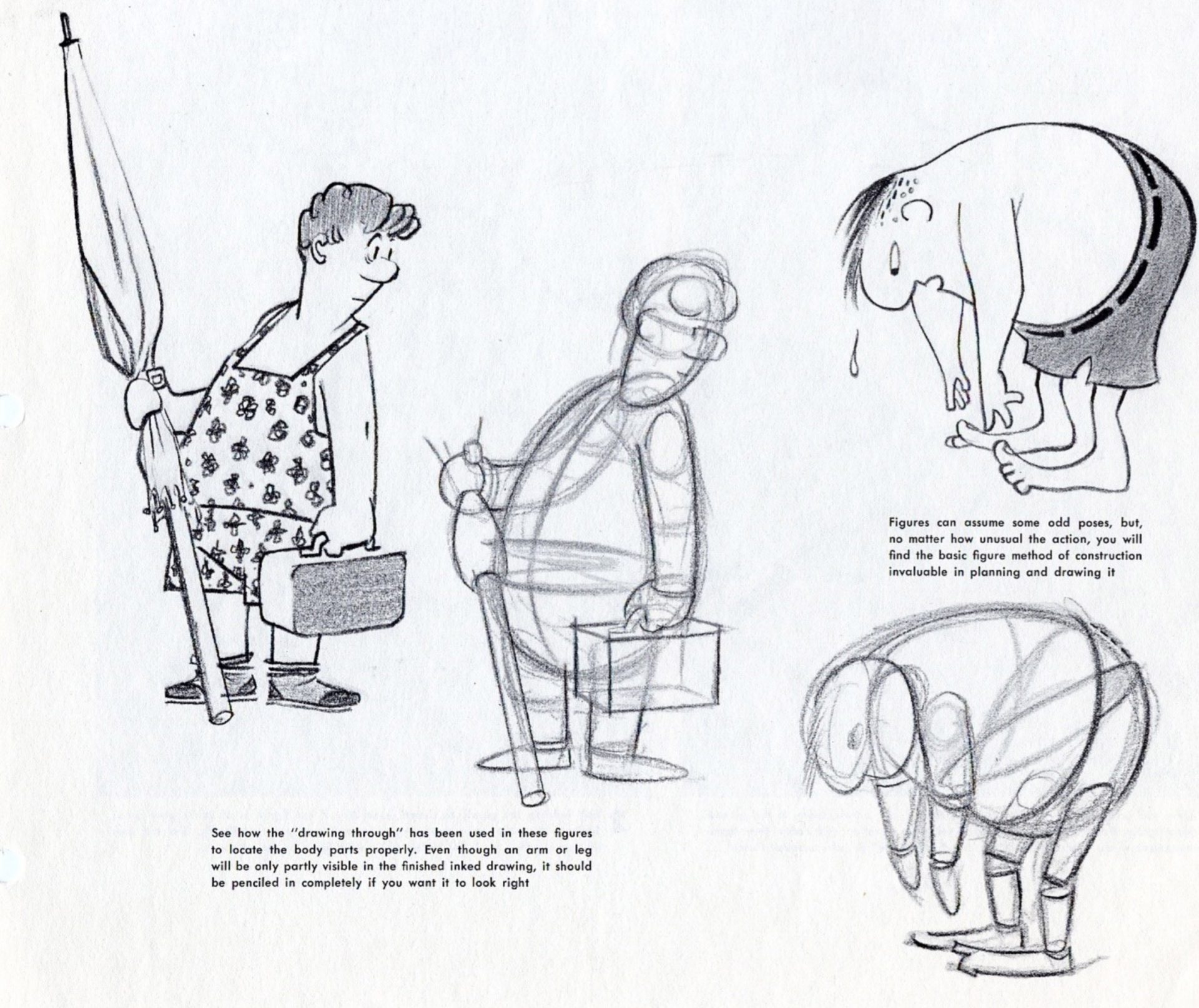 While there are many ways to construct cartoon figures, the step-by-step method demonstrated on these pages is, we feel, the best. It not only gives you a procedure for constructing solid three-dimensional figures, but it also helps you to think and feel the character while you construct it. It is in the first stages of the drawing of any figure that the action must be determined. Any action involves the whole figure, not just individual parts of it. A standing figure cannot be changed into a running figure by giving a running action to the legs only. The result would be a stiff, unconvincing drawing. So be sure, when you start to draw any action, that you first think it out carefully and then, from the very first sketch, show the action in the figure as a whole. Action and character are inseparable. As you think out the action of the character, you must also feel his emotional makeup and how it is reflected in the action. There is no substitute for knowing and understanding the kind and type of people you are drawing. Any cartoonist can draw a sloppy fat man, but the cartoonist who can make the reader feel the emotional sloppi­ness of the character above and beyond the physical messiness of dress is the one who gets the jobs with the big fat pay checks. 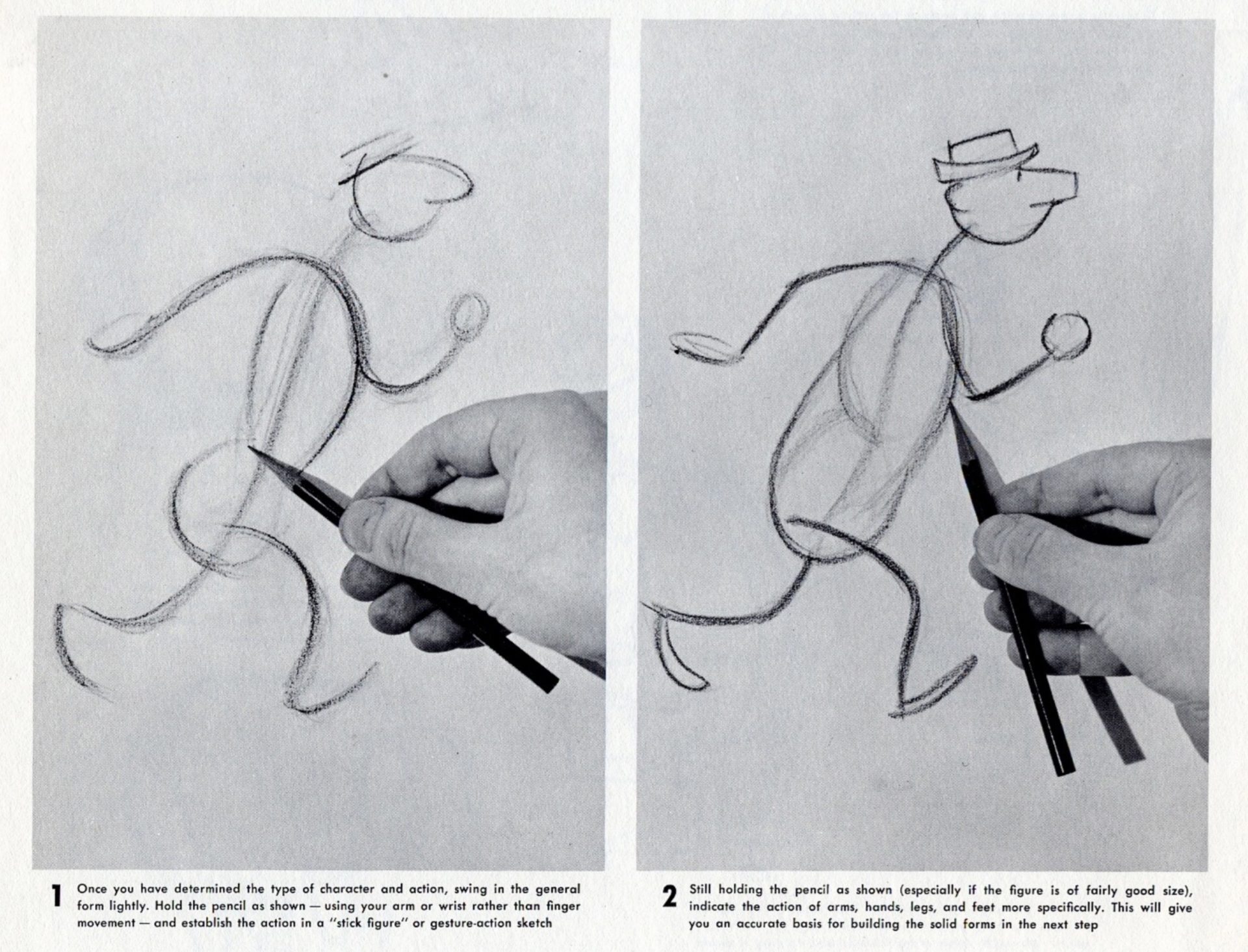 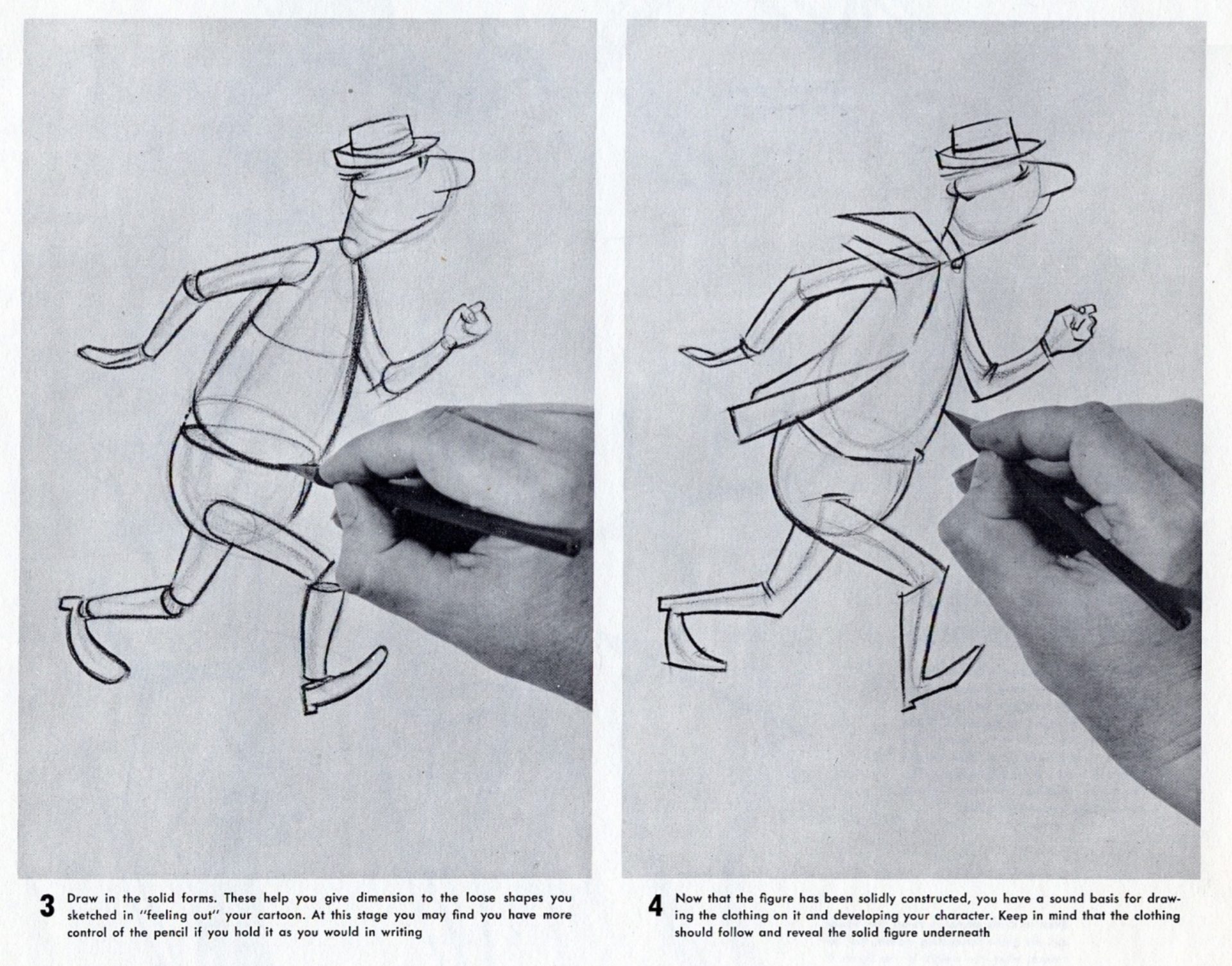 Drawing the figure in action

Form in your mind as clear a picture as possible of any action you wish to draw before you pencil in the preliminary action sketch. In a running action, for example, visualize the forward lean which suggests speed and the opposing twist of rib cage and hips which occurs (see arrows). The clearer the mental pic­ture, the easier it will be to put it down successfully on paper. 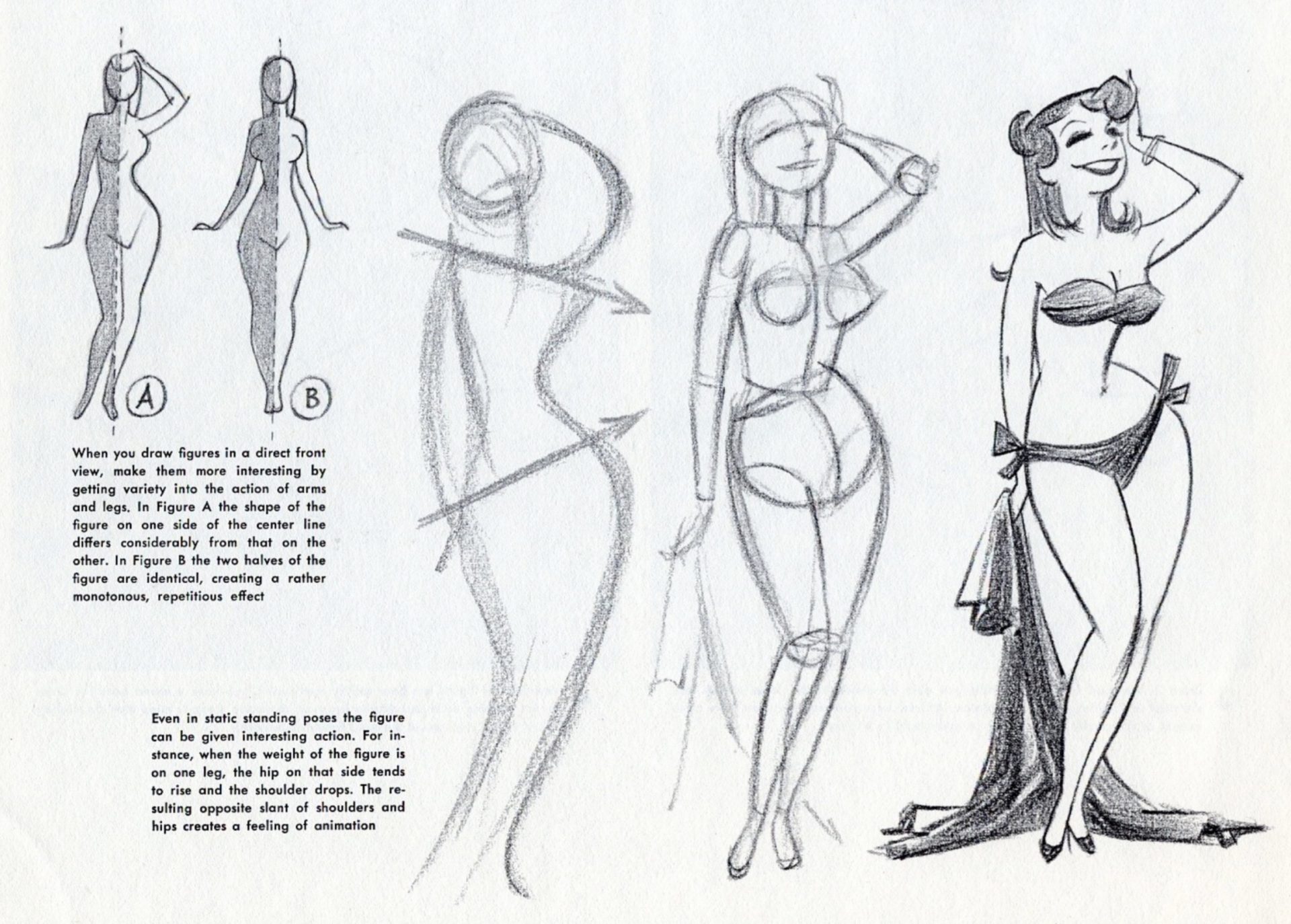 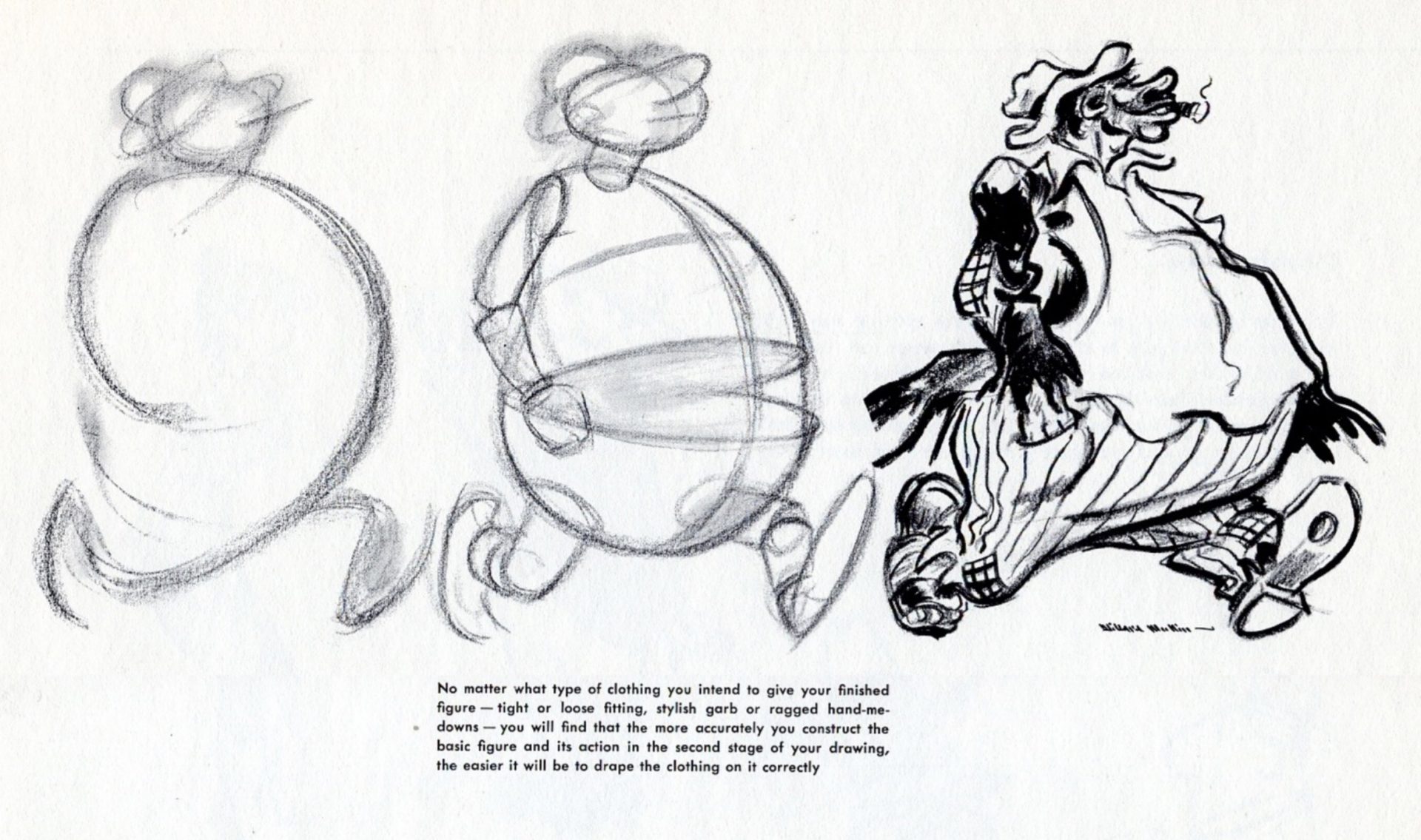 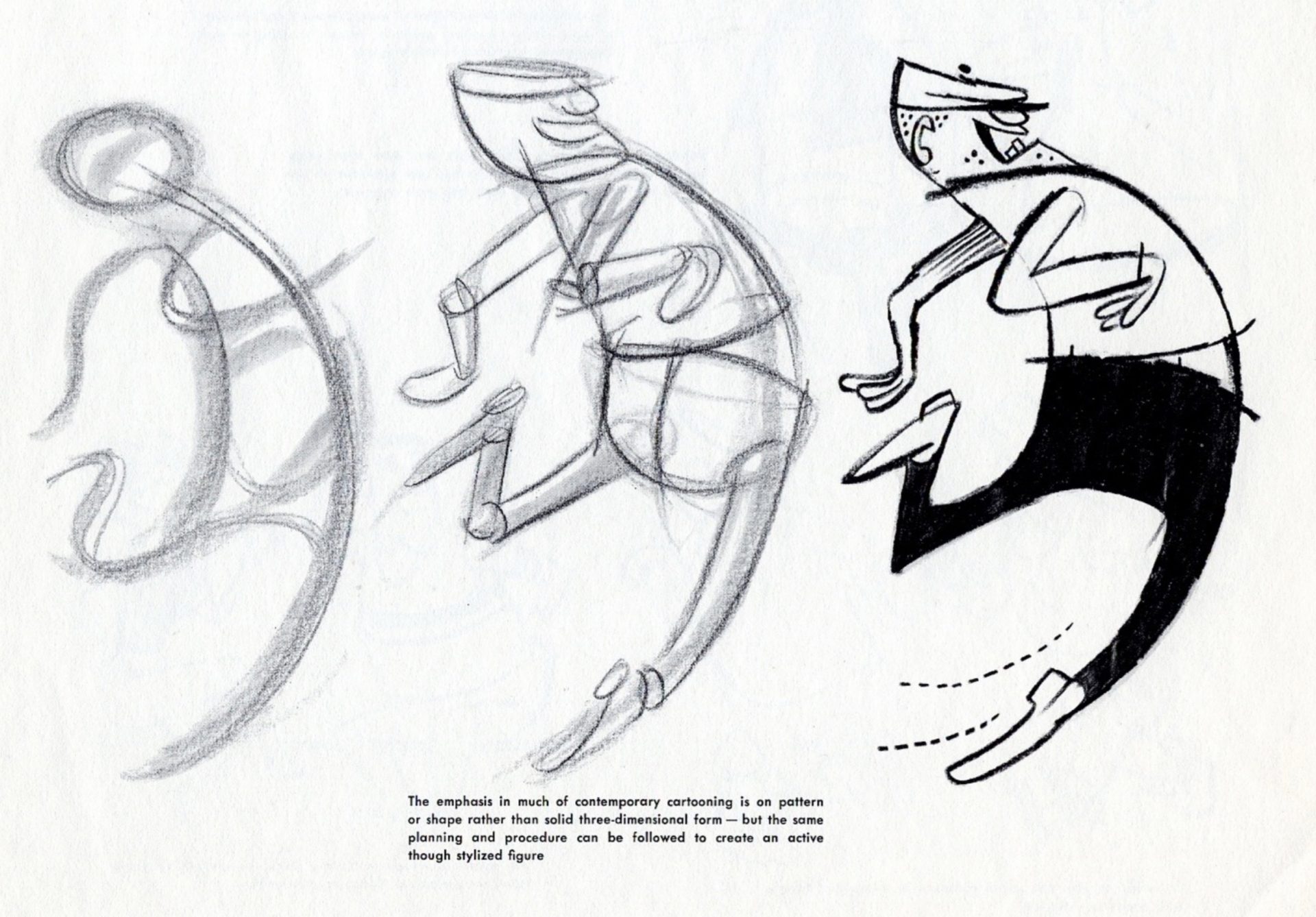 The type of clothing you give your figures and the way it fits will play the final part in creating specific types and characters and making them look convincingly solid and three-dimensional. The suggestions listed below will prove helpful to you in giving your figures the professional touch. Always remember that cloth­ing should go around the figure – reveal the form underneath. 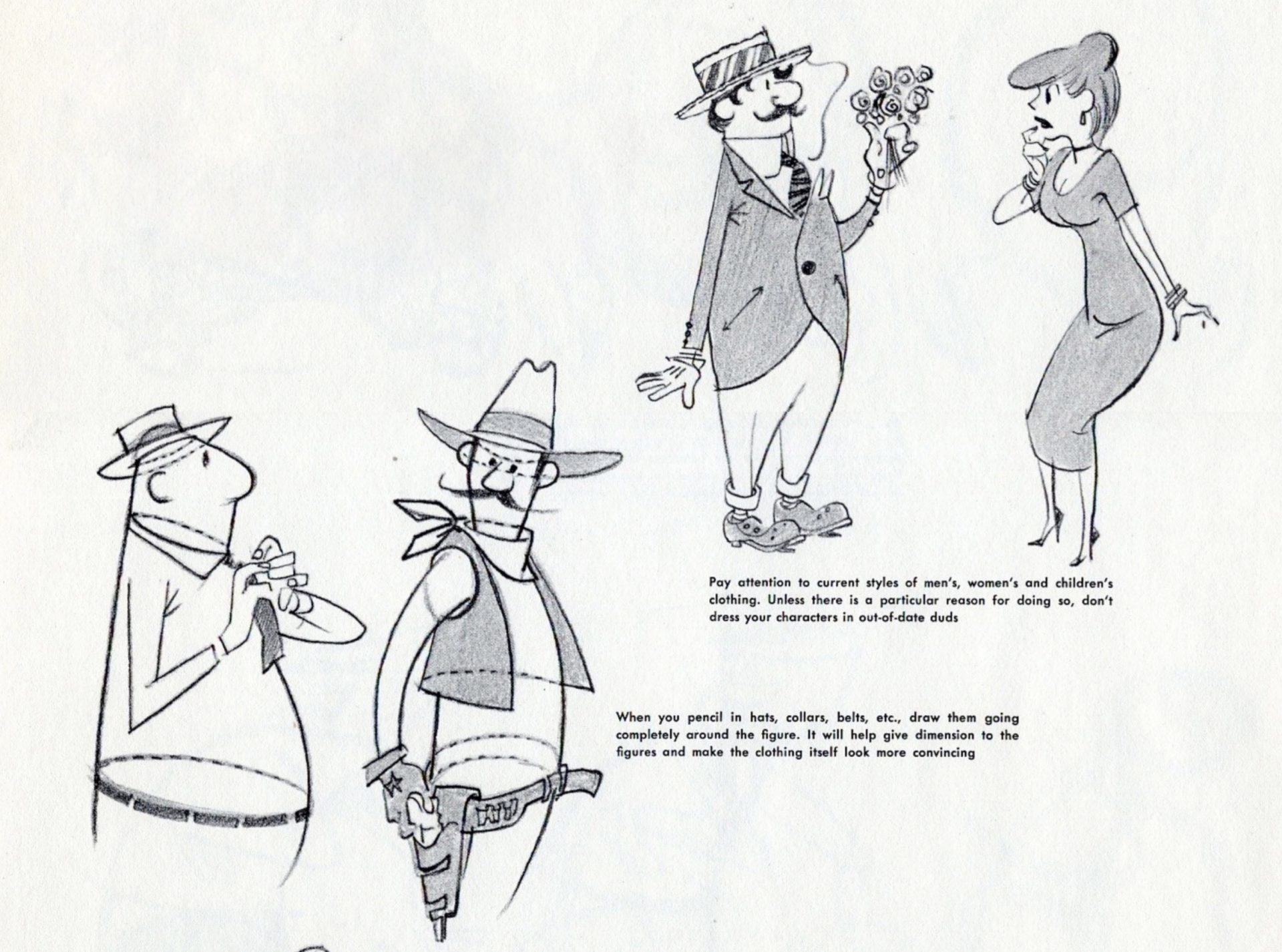