Just imagine. Imagine you’re in a dreamland, a wonderland of the CG ARTs where anything is possible, where wishes can come to life. Now, think that the dream is soon over and you will need to come back to reality. That was the feeling of the last day of The Master Classes. The event seemingly surreal, giving artists and aspirants a three-days-dream, would now come to an end. No. Not an end, but a Grand Finale for this year’s edition.

Ian McQue – Painting a Vehicle in an Environment 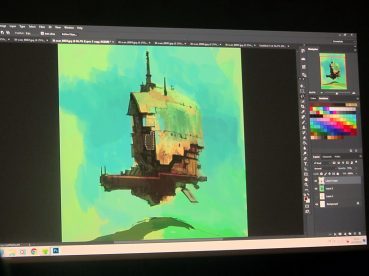 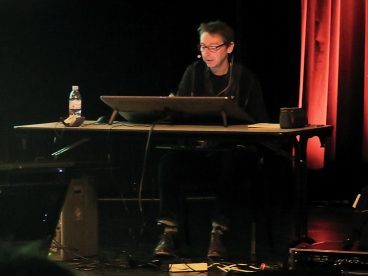 The Master Classes attendees started the day with a great dose of British humour. Honestly blunt, strikingly brilliant, Ian Macque chatted with the auditorium in a very informal way. “I travel a lot, flying is tedious, so I always carry a sketch book with me. Oh there comes that cliché thing!” He told us a bit of his history and origins, like his 20 years in games and will for a change in the film industry.

As he chatted, he did a speed paint/concept of a Steampunk ship and revealed his fixation (or fetish!) for vehicles and mecha. Ian also encouraged people to make questions during his session, and we learned that he is not much technical and work with brushes made by other artists. “I don’t use a lot of layers, it’s a laziness thing, also the fact that I find them getting lost.” Another quality to his work is that he always gives himself permission to improvise, to try new paths during the process. Much laughter later, we got to see the results and nonetheless, learned a great deal about this great mind, Mr. McQue.

ILM is (Industrial Light & Magic) is that legendary VFX studio founded by George Lucas when he began the production of Star Wars. Aaron introduced the auditorium a brief history of the studio, then some about his career. Before Art Direction, Aaron had done a lot of concepts for films such as Harry Potter, also storyboards and miniatures. He walked us through the stages of design process and taught us that “the function of a designer/concept artist is to solve the problem/design task, make a compelling image and stay faithful to the established aesthetics”.

We went through some case studies of films/concepts Aaron worked with and learned how was the process to achieve the final result on films such as Harry Potter and the Half-Blood Prince and Pirates of the Caribbean, Rango, Jurassic World and Avengers. On top of that, he shared with us some of the cover artworks he did, such as for the Star Wars universe. His motto for working concepts: “1-I try to solve the design, 2- I try making a pretty picture, 3- If it works, I try a new technique.”

Nicolas has been animating for about 16 years and he started out as generalist. Back then, he got amazed when he came across the first animators he met, and would try doing what they did. He worked in Spain, then moved to London, before he entered for Disney in the US. “As animators we have to provide body language driven by emotion.” He said that body language is also cultural, that he felt a lot of difference animating characters for an US audience vs. an European audience.

Nicolas prepared a class filled with technical aspects of the craft, from planning the shot to a little bit of character psychology (through Jungean Archetypes), the vocabulary of poses and the idea of an emotional vocabulary. We watched clips to illustrate case studies in films and animation. He revealed some secrets about Disney such as the culture of working pose to pose and that they don’t use motion capture.

Craig Mullins – A Journey into Art 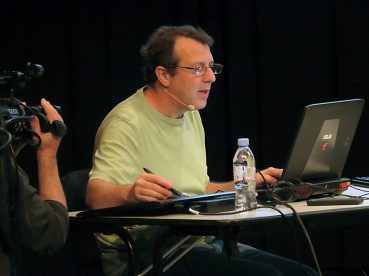 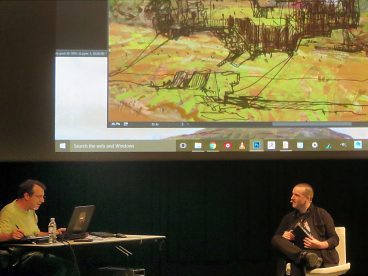 Seeing Fausto de Martini with Marc Brunet on the same workshop was quiet exciting. I.A.Mag and Craig Mullins prepared something special for us. They let the attendees decide the menu: Interview, or a Speed-painting session or both. Everybody cheered for the third option. Veteran Craig used Ian McQue’s concept for the speed-painting (how cool is that?!) and Stéphane Baril – AKA the Adobe Guy – made the questions. Craig, who had done industrial design, didn’t want to be a ‘car designer’. “I wanted to do the cool stuff, you know, drawing, illustration!”  He also tested Photoshop’s Mixer Brush, sharing with us and Stéphane the tools flaws and positive aspects. “There are no rules, only tools” and “Having traditional work with your mistakes makes you more thoughtful.” – are some of his ideas.

He also revealed that he goes back and forth from character to environment, that he needs to do/learn both and he advised: “Feel free to do what you feel like. There’s no law that says you can’t do that.” Craig also answered questions made by the attendees. 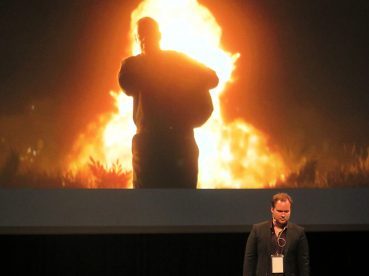 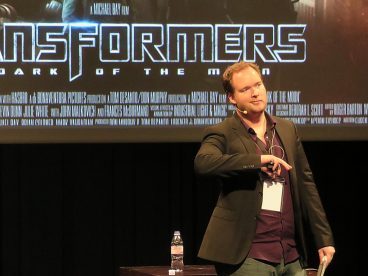 Wherever Allan goes, he takes some serious explosions with him. On the big screen, of course! The awarded VFX artist has a gigantic CV: God of War, The Equalizer, Transformers and a lot more told us how pleased he was in coming back to the Master Classes. We went through his career path, then a metaphor, which he illustrated with 2 funny clips of famous very guys who were caught on a bad day, and one of them made it through despite the odds and the other didn’t. That was to say he have seen a lot of people who reach their dream jobs, when challenged, wish to come back to their comfort zone.

He told us in a great sense of humor the process behind shots such The Equalizer and how things can get rough during the production of a film, and how “You may not give up doing excellent job despite everything”. Allan, who have also worked assembling teams/hiring people, revealed some neatly tricks on how to show what you can do, using cheap cameras, such as your own mobile phone, and free tools such as Google Earth to create cool VFX for your portfolio. He demonstrated the results in a clip where he imploded a building. “Go out there, film stuff, blow stuff up, do some tornadoes, and so on. A video like this can show what a person can do in the pipeline.”

Dan was the last one to speak in the MC16, and despite that his workshop was very relax while taking the attendees on a ‘thinking journey’. He is art director at Pixar and his lecture was aimed at both to animators and concept artists. We went through 4 basic principles. They were: ‘Draw what you know/ Passion, Trust your Instincts, Be Honest’ and ‘It’s Not Always about the Drawing, But the Ideas’.

“You must learn that your instincts and sensitivity are right. Each time you trust them, they get stronger.” And he also quoted that “To be truly innovative, you must look beyond what has been done.” We went through some case studies of his concepts for films such as Toy Story, Wall-E, Inside Out, and other concepts he made over the years.

At the very end of this massive and unforgettable event, many hearts could finally have some peace. The results of the Collaborative Daily Challenge, sponsored by Adobe and the Master League winners, sponsored by Wacom, were finally announced.

And the winners were these cool artworks: 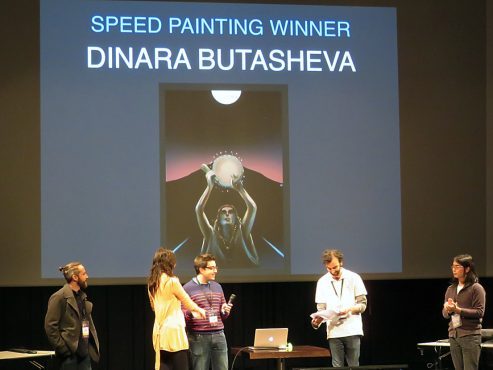 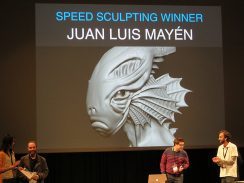 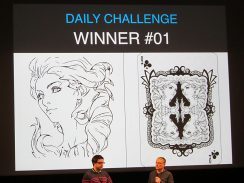 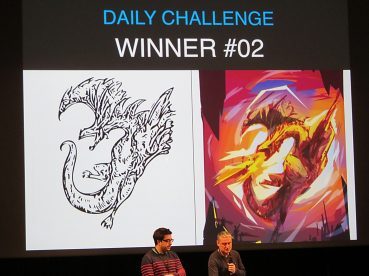 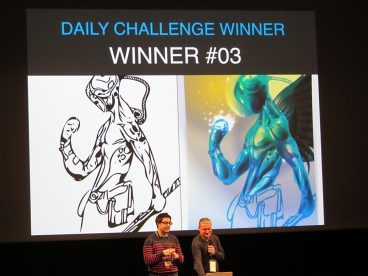 Patrice Leymarie & I.A.Mag and the speakers joined together at the stage to wave goodbye to the auditorium and get warm, well deserved-applauses. We all felt that a great victory was achieved after months of hard work and strategic planning to make it happen, after everyone involved had a blast of knowledge, life advice, job opportunities, portfolio reviews, and above all, a fun time.

Those who could, went to one last party that evening. Overall, everybody was already saying that they’d like to comeback “next year”. That’s what we all hope for; for the next chapter and surprises of the Master Classes.