After the first day of Master Classes,  the adventure through knowledge and celebration of the CG Arts continued. This was a peculiar day, nonetheless. Even though all days of Master Classes were  quite special, Day 2 brought about some surprises: The Master League Competition Finale in both 2D speed-painting and 3D speed-sculpting and a dual workshop with Fausto de Martini and Marc Brunet. 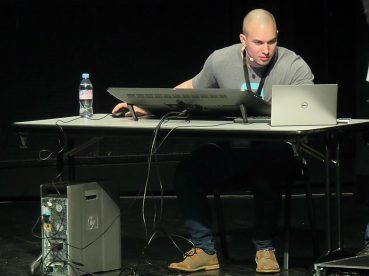 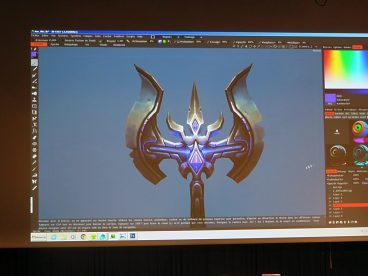 Ever smiling Marc Brunet who works with game art managed to take the attendees from their beds early that day (especially when people have been was a partying the night before). Everybody was curious to see the development of his weapon concept. He sketched a couple of ideas for an axe, then picked one and began the modeling on Maya. “Always use reference. It doesn’t have to be like the real thing, but something to sparkle your design.”

He got the 3D model and on 3D Coat he applies lighting and shading on specific parts of the design –into different layers as you would with a painting/photo-editing program. He worked switching between Maya, Photoshop and 3D Coat, and explained to the audience the technical aspects of what he was doing. He fine-tuned the UV map on Photoshop, working the colors and textures and applied it on 3D Coat. After a well-humored workshop, we got to see the result: a super cool colored Fantasy axe!

Mark Theriault’s speech had focus on VFX, but its principles can easily be applied to other areas of the CG Arts. “Everyone wants to do complex stuff, but they forget they need to go through the basics.” He used the different stages of a painted rose to illustrate the idea: “in order to get complex, you need to start with the simplicity of a foundation and slowly build up”. Mark revealed the behind the scenes on the VFX world and that Time/Budget id ‘God’.

Some of his tips to VFX artists are “Show your work early enough”, regarding rejection/revisions and “At the end of the day you’re selling a product, which is not your art, but you can leave your stamp on it.” Mark revealed the technicalities of some of his works, how he achieved the results on programs such as Houdini. His workshop ended with a fun session of Q&A. “Always find the time to do your best work. Always.”

I. A. Mag created a 2D and 3D competition called Master League. It has been going on for some months before the Master Classes, where competitors had a limited time and a theme to create a “speed” artwork. The Finals took place at this year’s event. First the 2D Speed-Painting and was presented by Benjamin Couronne. Marc Simonetti talked to the audience as he watched the 2D artists’ creative process. 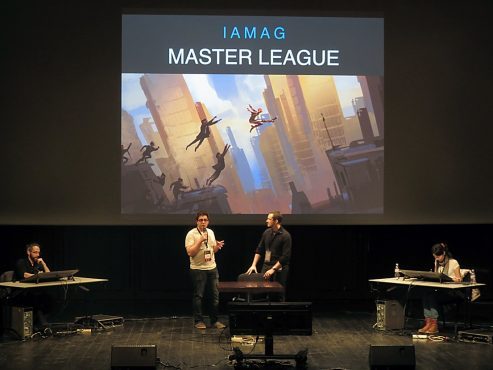 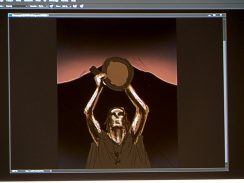 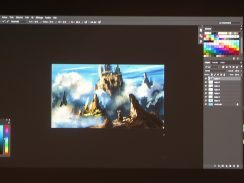 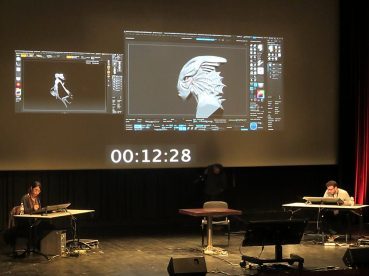 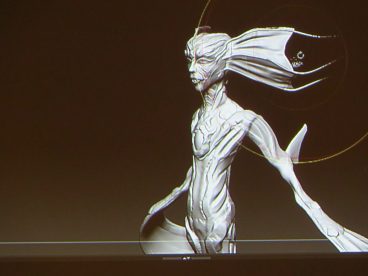 Then the session for 3D Speed-Sculpting started. Competitors had one hour (twice the time of the speed-painting session) to create models based on the day’s theme. On both competitions one thing was very noticeable: the audience was tense, curious, eager to know how the results would turn out. And for the artists, time seemed to fly really fast.

There was silence and concentration. You can see the results for both Finals at the end of Day 3. 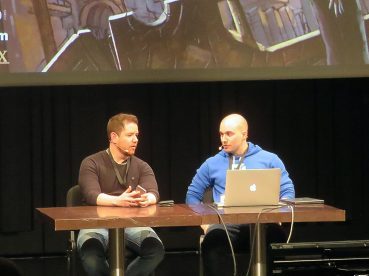 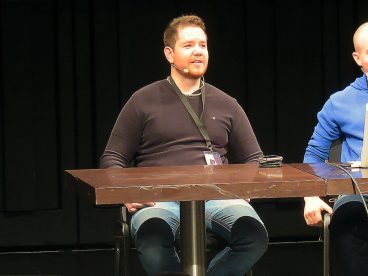 Everybody was quite enthusiastic about the format of this workshop where both Fausto and Marc would talk about their experience/career path in the industry. Marc began showing drawings he created when he was a kid. As he grew up he got inspired on books and other people’s works. He copied a lot in the beginning to both learn and practice.

By age 15, he realized copying wasn’t cool and began creating original art. 2004 he got his first tablet, and by 2006 he did his first tutorial for ImagineFX. Even after getting a job he never stopped painting/drawing for himself. As a side-project he started an educational YouTube Channel (Cubebrush) and then ventured into the world of entrepreneurship by founding his startup company under the same name. With the goal of helping and promoting the art community, they recently launched their new online marketplace for artists and game developers – cubebrush.co – in December 2015.

Fausto confess he had a similar beginning, he was always drawing as a kid, and was a fan of Star Wars, Blade Runner and the like. He would create weapons out of isopor/Styrofoam and cardboard whenever his parents bought stuff for the house. He applied for college within Advertisement & Marketing in São Paulo, Brazil. But he kept drawing/painting/creating 3D art as he went to college, until he realize it was no point in continuing with that tuition.

He dropped out and went to a 3D job, where he learned a lot more of the craft and applied it to his personal works. A big turn in his career happened when he did a FanArt of a Blizzard character. It was feature on the CGTalk and a few days later Blizzard contacted him. Wherever Fausto worked, he kept on doing his personal art, despite the long hours of job. The feature film Avatar was a big inspirer for Fausto designs and since then he would like to work for films. He later worked on Robocop 2014 and the sequence of Avatar. He shared with the audience concepts and the history of his Project Edge, a Sci-Fi universe he created. We went through some of his work concepts as well and he explained us the process.

Marc and FAusto emphasize that an artist should always find his “goal”. “If you don’t have a goal you won’t know how to get there.” Fausto: “Start building things that point in the direction of you want to do. If you really want to be good at one thing, you have to invest on that.” Other advices the duo give are: Align your portfolio with your goal, Be able to take criticism and Practice patience. And they complete the session with Q&A.

In-Ah, who is very charismatic, introduces herself explaining about her peculiar name, and her roots as half-Korean and half German. She shared with us how she started out very differently than most artists on the CG Arts, she was very academic, going not to one, but three schools! She also freelanced on commercials, worked in different cities, such as London and Vancouver. She entered for Sony and worked on films such as Smufs, Hotel Transylvania and the Amazing Spider-Man. Now she works as instructor/teacher.

We go through a lot of technical aspects of animation and workflow, such as the ever important good use of reference, Secundary Action and Subtext. We understand the process behind some of the movies she worked on, such as Hotel Transylvania. It was also fun to see the ‘Before and After‘ session, where she showed a feature films using animated characters on the shooting phase (without animation/VFX) and compared with the final result. It made the audience have good laughter!

And that marked the end of one more day of success. Now the attendees and speakers would get ready to party and have that informal art talk in a Parisian Brasserie with some drinks and snacks.