We’ve been using Zbrush for a long time, and our approach evolved alone with the package itself. In early days we used Zspheres extensively to create a base mesh. Now we are using more advance tools like Dynamesh and Zremesher. Itís safe to say that without Dynamesh doll making process wouldnít be the same, if possible at all.

If youíve never opened Zbrush, all those terms are most likely gibberish to you. But the gist is this: sculpting with digital instruments are very much like dealing with real clay. Itís an organic and natural process once you get a hang of it. And you also get to use symmetry, which is a great time saver.

All of this is amplified by the fact that ZBrush has dozens upon dozens of different brushes, which make your creative life much easier. Clay brush, inflate brush, move brush, etc. What all this brushes do is they basically push the vertices about in 3D space to achieve certain shapes.

Hereís a cross-section of an object in Zbrush. As you can see, itís hollow.) 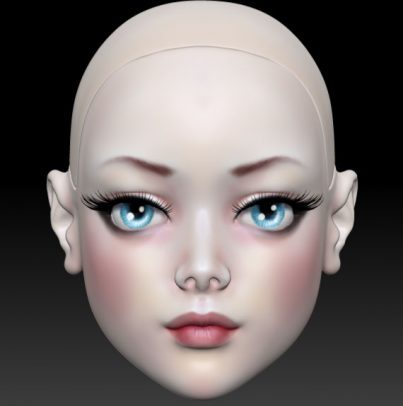 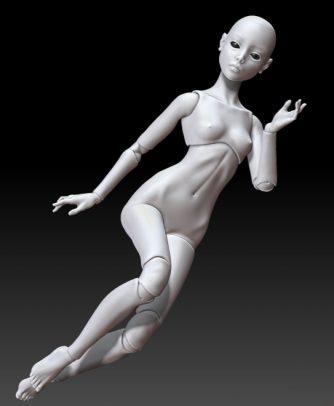 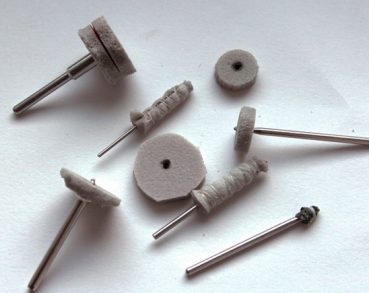 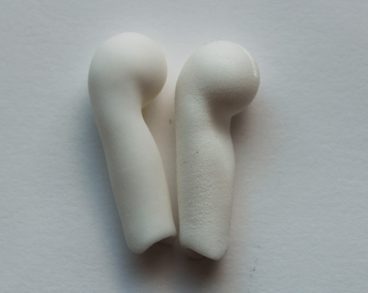 As we keep sculpting we gradually increase the density of the mesh, so that we can put in more details. In Zbrush an object typically has several levels of sub-division, and you constantly jump from one to another. Lets say, that the lowest level has 1000 polygons. If you add one sub-devision on top of that, youíll get 4000 polys. One more means 16K and so on. Each devision multiplies the density by 4. Lower levels are used to define broad shapes, while higher sub-devision levels are for detailing.

There are certain nuances you have to consider when sculpting. One of the more general aspects of digital sculpting is that you have to be conscious of density of your mesh at all times. Some parts of the model may call for more polygons, while others donít. And not only that but you also have to make sure that the mesh structure is as even as possible, otherwise you may get defects on the surface. Thankfully more recent tools like Zremesher help deal with such issues very quickly. What previously took several hours can now be done automatically in a few minutes.

The other thing has more to do specifically with making dolls. If your sculpt requires some very fine details, it might be a good idea to postpone it till your model is cut into pieces and the joints are more or less complete. Otherwise all those fine details will most likely be smeared by all the re-meshes which the model will have to endure.

There are great many tutorials online that will teach you how to work in Zbrush. But thereís hardly any info on how to use Zbrush to make dolls. Itís a gigantic topic and this article will not attempt cover all of it. Itís more like a theme for book. But hopefully youíll at least get a rough idea of what itís like to design BJD digitally.

So, we managed to make a human figure. Whatís next? Hereís the todo list:

-We need to cut the figure into parts.
Form joints using spheres and boolean* operations.
-Keep testing the joints inside the application to make sure they not only look pretty but also have the necessary functionality.
-Make the cavities as well as holes for the elastic.
-Add finer details and finishing touches.

*Boolean might not be an ideal term for this, but it’s generally used to describe combining and subtracting objects.

Now the same steps in pictures
The figure is cut along the lines of the future joints.
Next we take the spheres and position them in proper places.
We test the range of motion.

And now we proceed to make the actual joints. We do that by merging and subtracting objects. That marks the end of the easy part. Up ahead thereís a huge chunk of work, namely manual adjustments around the spherical sections. We need the surface to be perfect in order for the joint to work in the real life. Therefor we have to compensate for all the defects which might have resulted from a rather complex Boolean operations.

Different limbs might call for slightly different approaches. Right here you can see sections of the hand color-coded (itís called polygroups) and broken into parts. Next up are the steps outlined previously: we close the holes, perform Boolean operations and test the joint.

The thickness of a socket wall is something you have to consider very carefully. It canít be too thin since itíll have to be printable. It might sound simple, but there many aspects to making joints which can only be fully understood through experience. 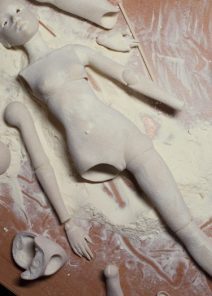 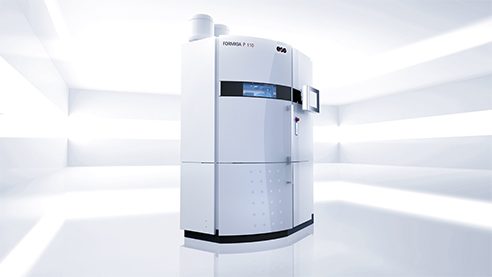